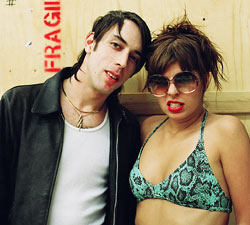 [tag]Wolfparade[/tag]’s frontman Dan Boeckner is back in the spotlight with his side project: Handsome Furs, together with fiancée Alexei Perry. The Vancouver couple, now, unveil their latest and second video “Cannot Get Started“, straight from their debut album Plague Lake. The video itself is kinda simple and predictable for a romantic-like track, such as this. The video features, at center of the action, a young couple that meet in a dinner, like each-other, stroll a bit under the moonlight and kiss in a very romantic nature, after which they drive away. In between frames, the band is shown playing.