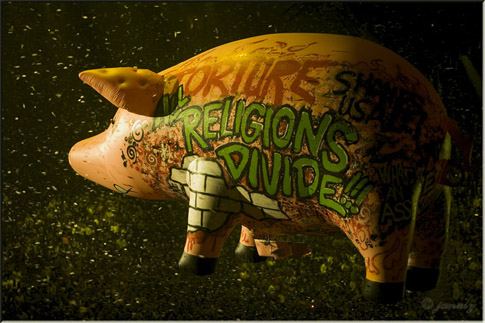 The famous Pink Floyd pig, which nowadays can only be seen live on Roger Waters gigs, has mysteriously disappeared at Coachella on Sunday (April 27). The giant inflatable pig, part of Pink Floyd’s stage show since their 1977 iconic LP “Animals,” simply broke free from its tethers above the Coachella crowd and drifted off.

Organisers are offering a $10,000 reward and four festival tickets for life in exchange for Waters‘ signature pig, which was seen floating away during his ‘Dark Side Of The Moon’ set at the three-day festival, as reported by Reuters. This wasn’t the first time this kind of thing happened, either. Back in 1976, when preparations were being made for the Animals cover photoshoot at the Battersea Power Station in London, the band lost the flying pig from their sights for about 5 minutes, enough time to drift away. Planes were diverted or postponed, as the pig was flying directly through their paths. The pig was ultimately put down, repaired and then inflated back up for another try.  After the band broke up in 1985, the flying pig made appearances during Roger Waters’ solo concerts, but on two occasions in 1988 it was lost.

Anyone with information on the lost pig should email lostpig@coachella.com. Sightings have already been reported.