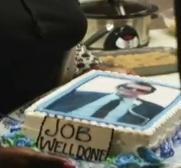 After a run of somewhat mediocre releases across the band’s 10 years existence, Fruit Bats have returned this year with their forth full length, “The Ruminant Band.” I’ve yet to have the chance to  sample anything from it, expect the title track single and a few other tracks found on YouTube, but I’m really liking it so far. The video for The Ruminant Band, the album’s stand out track, tells the story of seemingly heart felt memorial. Seemingly, because it soon starts to escalate into something different. The Ruminant Band is out now on Sub Pop records.