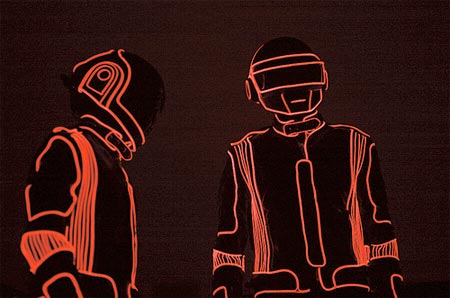 This summer I managed to get ahold of some footage and samples of the alleged new Tron Legacy soundtrack by futuristic house DJs Daft Punk. I was sorry to find out a few days later that they were actually fakes. Today, it seems like we’ve been finally granted to hear the real deal once with the release of this latest Tron trailer, which besides revealing some incredibly awesome scenes from the upcoming 3D blockbuster, also sets the mood musically with the duo’s “Derezzed” – a brand new track off the upcoming soundtrack. You can get a pretty good idea of the electro-disco track during the 1:43 minutes video, where you’ll also get a chance to catch Daft Punk featured for a few seconds. Postured as futurist DJs of course.