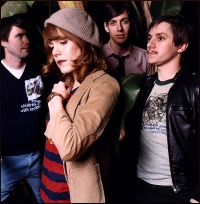 Here’s another peek on [tag]Rilo Kiley[/tag]’s upcoming forth album “Under The Blacklight“, a very promising LP from what I’ve had the chance to sample. “Silver Lining” is the title of the second track, after the extremely sexy “Moneymaker“, that Rilo Kiley has been gracious enough to share with ous, before the release of the sexiest album ever (?), on August 20.  The song is loads of fun and extremely catchy, with ’60 feel and beat and a country/folk like guitar line, I’m a really sucker for retro.