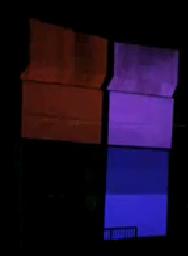 Last week, when I featured one of the leading tracks from Volcano Choir’s debut, “Unmap“, I said: “A product of the joint creative minds of Bon Iver and Collections of Colonies of Bees, the album impresses through it’s deep and sincere music, straight from the heart. Bon Iver, as always, is simply incredible, even though his vocals aren’t featured on most of the album, his presence however,  for those of us who’ve had For Emma on repeat for months and months, is easily recognizable and shines like a luminescent gem. This is an album that will space you out, that will isolate you from the outside world and even your petty train of thoughts. A blissful experience…” A week later and a few myriad of spins later, I’m still entranced by it. A veritable 10!

The video for Unmap’s first single, “Island, IS“, definitely surprises through it’s incredible simplicity with which director Michinori Saigo chose to approach it. Blocks of color are light over a bridge’s column under the song’s rhythm, revealing an enchanting spectacle, as dusk turns to dawn. Less is more!