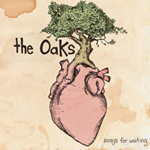 Passion and meaning have somewhat started to fade away in today’s music, particularly in the more lyrically prominent scenes like folk and indie. The Oaks however, a Florida based band founded by college mates Ryan Costello and Matthew Antolick, are a different story, with potent lyrics, that convey a powerful message, as well as a great display of skillful musicianship. Much of their songs are centered around war and man’s auto-destructive nature, themes influenced by Ryan Costello’s two-year stay in post 9-11 Afghanistan, which led to the duo’s debut album conception. Now after expanding The Oaks to a six piece band, the group follows the same style and direction on their sophomore release “Songs For Waiting,” but with a much higher degree in sound quality and vibe.

Now expanded into a full-sized band, The OaKs, definitely have reached a new level, musically speaking, feeling more complete and most of all alive. On my first listen, of the record, I was simply stunned by how well the layers upon layers, of rich instrumentation, turned out, blending vast array of musical genres into a eclectic mix of orchestration. “Masood,” one of the album’s stand out tracks, is album’s anthem, in which different bits and pieces of Songs For Waiting can be found, like the ever present clean mandolin chords and piano notes, as Costello tells the story of a young Afghani boy on his road of becoming a man.

“Old Bones” exposes the band’s more popish nature, as up beat synths and riffs are scattered all over the place, though the lyrics aren’t what you’d call made up of conventional pop lines, as Costello lays down intricate metaphors of life, time and death. War couldn’t have escaped unnoticed on Songs For Waiting as well, as a tragic story of war and repercussions unfolds in “War Changes Everything.” Musically speaking, The OaKs have come a lot of way since their earlier debut, managing to successfully handle and convey a vast array of instruments, like few other bands can, although Ryan Costello’s vocals may at times lack the necessary vigor, but that’s no necessary a set back. All in all Songs For Waiting is a beautiful collection of song, by a group of artists that want to make a difference in the world.