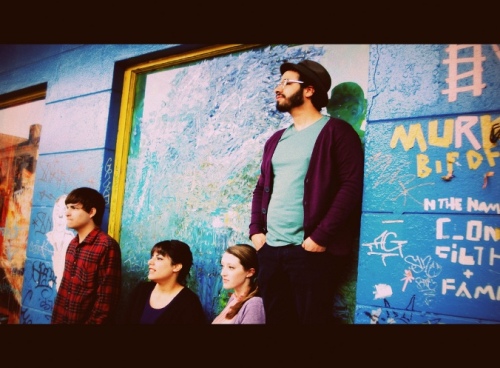 So there is this band called Youth Sounds that I’ve been seeing popping up on a few blogs I frequent that I finally decided to pay attention to. They didn’t catch my attention at first, but after I saw them featured for the third time, I thought I’d give them a chance. I listened to one of their songs and I was instantly hooked by their stylish indie sound.

Youth Sounds creates enchanting atmospheric music with leisurely melodies that linger in your head. The sound is taken to a new level by the resounding drum beat that keeps the sound fresh and dynamic and keeps the breathy vocals from being too depressed. In fact, they’re not really depressed at all, even when the subject matter dives into deeper emotional exploration.

The root of the band is a brother and sister duo from New Orleans who gained their musical experience in church choirs. This was the last thing I expected to come out of New Orleans but I’m not surprised that the city’s cultural vibrancy contributed to the band’s artistry.

I’ve tried to buy their EP The Bit Parts but it isn’t available yet, so I retraced my steps and was able to listen to all of their EP by visiting various blogs, (it’s easier than it looks, since the EP is only three songs to begin with) but I still wanted more. When I heard they put up a new demo on MySpace, I was sure to head on over and listen to “Foolish Love.”

Upon first listen, I noticed that their signature driving beat was missing. Overall the song was a little empty musically, but then again, it is a demo, so I wouldn’t be surprised if more layers are added as the song progresses. Erika Mejia’s vocals aren’t as smooth or distinct as they usually are, but her delicate way of handling words is still beautifully intact. Nice to know, that it isn’t the vocal effects that are doing all the work.

I’m very curious to see what direction this song takes it. Part of me wants to see Youth Sounds show their musical diversity and create something different from their other songs, but another part of me wants to hear them bring back the house beats. I’m torn, but it’s interesting to hear the song in the middle of its creation when its identity is being forged. It’s like watching a little kid grow up and wondering what kind of adult he or she will grow up to be.

As of now, the band is unsigned, but I suspect they won’t be for very long. Give their music a listen on MySpace or visit them on Facebook and if I were you, I wouldn’t be afraid to tell them what you think about their new song.