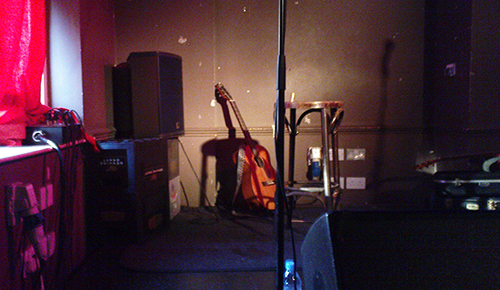 Clichés are basically the exact opposite of a box of chocolates: you always know what you’re gonna get next. The key to making clichés work in songwriting is to couch the clichés in a bunch of other interesting stuff so that they’re not all that important to the song, in the end. This is a lesson I learned last night, watching Jason Isbell give a fantastic performance upstairs in Whelan’s.

Supporting act for the night was one Anthony Gibney, a Dublin-based singer-songwriter. Despite looking every inch the prototypical sensitive indie type, he played a surprisingly spry vein of acoustic rock, sounding more like a less interesting Richie Sambora (he of Bon Jovi fame, youngsters) than a knock-off of Snow Patrol or some such. And he was certainly an able guitarist, effortlessly switching between lyrical fingerpicking and percussive riffing to great effect. His biggest let-down was the triteness of his lyrics – lines about “riding into the night” and “standing in the darkness, waiting for the sun” barely cut the mustard when Grandpa Clapton started using them in 1840, and they just seem lazy – nigh on laughable – today. Still, he was energetic and engaging, and looked like Tory Belleci from Mythbusters, so a tendency towards clichéd 80’s rock was easily forgiven.

Jason Isbell’s lyrics, on the other hand, tread that fine line between “cliché” and “truism”. There are only so many ways to tell the story of an older woman seducing a naive younger man, or the difficulties of a trying relationship – Isbell’s solution seems to be, if you’re gonna do it, you’d best tell the story in an interesting way, then throw in a kick-ass duelling guitar solo. And y’know what? It works.

Accompanied by the talented Browan Lollar (seemingly played by Xander from Buffy the Vampire Slayer), Isbell certainly didn’t let the fact that he was playing an acoustic show in a tiny venue diminish his status as the Drive-By Truckers’ erstwhile guitar guru. Indeed, the biggest cheers of the night came for the Truckers’ songs (“Outfit” was a particularly popular choice, and rightfully so) or the more extravagant guitar heroics. 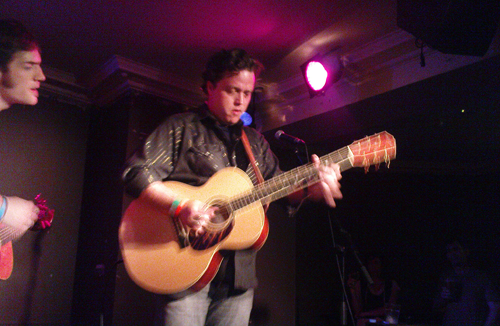 Which isn’t to say that Isbell’s solo material was lacking in any way. He kicked off with a great rendition of “The Magician” from his solo debut Sirens of the Ditch, and soon followed with a majestic, soaring performance of “Cigarettes and Wine” from this years’ Jason Isbell and the 400 Unit. While country music is hardly in vogue these days (or, let’s face it, in this country), Isbell’s authentic take on the genre – undoubtedly helped by the time spent around Patterson Hood and Mike Cooley – is disarmingly honest, and void of any pretense at “hipness”. It makes for a charming culture clash – he’s Muscle Shoals through and through, and something of a fish out of water in an Irish setting. Early in the gig, he picked up a notebook Gibney had accidentally left on stage, and couldn’t read a single word. “I think it’s written in an accent”, he quipped.

The show was, unfortunately, beset by technical difficulties – Isbell broke the same string on his guitar twice, and one of Lollar’s leads gave out halfway through the show. But Isbell carried on undaunted – as Lollar restrung the afflicted guitar, Isbell took the opportunity to break out a Drive-By Truckers’ b-side, “When The Well Runs Dry” , and Patterson Hood’s obscure solo song, “The Assassin” (which went over well with whatever percentage of the audience was composed of die-hard Truckers fans). He plowed through The Dirty South‘s “Never Gonna Change” with 5 strings for the encore, deadpanning that guitars have six strings so that if four break, you can keep playing.

The higlights of the show didn’t come from the Truckers’ catalogue, though: they were Isbell’s own. Fist, an impassioned performance of “Dress Blues” – written for a kid from Isbell’s high school who was killed in Iraq – brought a hush over the crowd, all the better for hearing the wonderful harmonies between Isbell and Lollar. Later, having requested a shot of whiskey, Isbell returned the favour, and took requests from the crowd, which meant we were lucky enough to hear the marvellous “Chicago Promenade”.

When rock bands do unplugged shows, there’s always a danger that it will be a leaden, one-note performance. But Isbell’s roots in country and soul music gave him a firm footing in this kind low-key, intimate setting – perfect for Whelan’s Upstairs. And his natural flair for turns of phrase and his incredible guitar madskillz made sure the material never slipped far south of “captivating”.

He departed with a promise to come back with his full 400 Unit backing band in tow, but if this gig proved one thing, it’s that Isbell doesn’t need a band – be it the 400 Unit, or the Drive-By Truckers – to put on a damn good show. 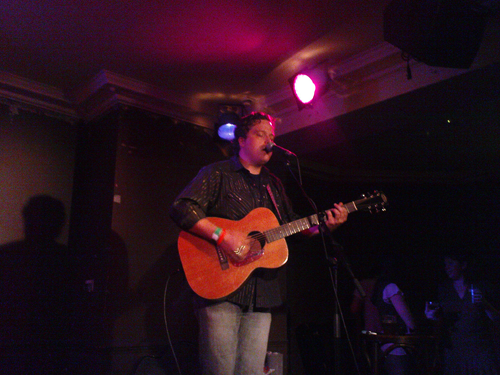