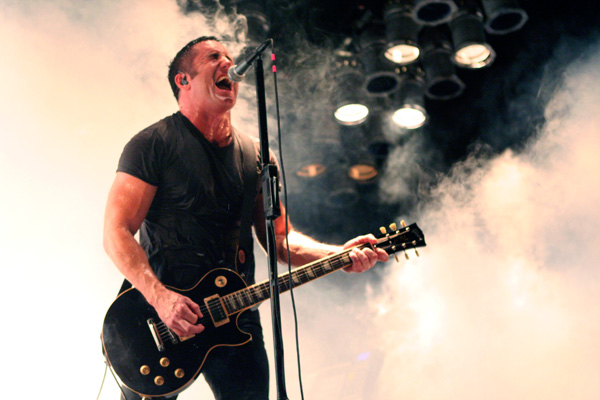 “It just dawned on me that this is our last show ever in the United States. Don’t be sad. I’ll keep going. But I think I’m going to lose my mind if I keep doing this, and I have to stop.”

Don’t be sad my ass. How would you react, if the frontman of a band that basically has a cult following revolving around it announced the dissolving of over 20 years of musical genius? Yes, I’m talking about Trent Reznor and his shocking statement during the Nine Inch Nails set at this year’s Bonnaroo music & arts festival.  I, for one, blame it on the wife.

Anyway, speaking of Bonnaroo, this year’s fest was amazing (as always)! Unfortunately, I had to watch this one over the tube again, since neither me or anybody else writing for ZME could attend it. Everybody else said it was the bomb though – lucky bastards! Check out some really great press and photos from Manchester here.

Going back to Reznor and his shitty mid-life crisis, the NIN’s set was trully awesome! From what I hear, the band’s stage presence itself wasn’t very impressive, considering last year’s tour, however the band went through a lot of hits and crowd pleasers, such that everyone there almost crapped their pants from all the awesomeness. If you don’t believe me, head over to YANP! and download NIN’s Bonnaroo live set and see for yourself. Bellow you can check out a really interesting cover of Gary Numan‘s Metal performed by NIN in Manchester.