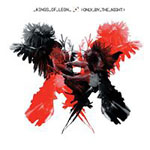 Kings of Leon: Only by the Night

Back in 2003, Kings of Leon emerged as garage rock saviors with their widely appreciated debut, Youth and Young Manhood; a record packed with linear, simple, but catchy as hell songs like “Molly’s Chambers,” “Red Morning Light” or one of my favorites from the band, “California Waiting.” The same recipe was applied for their sophomore LP as well, as “Aha Shake Heartbreak” shattered charts and settled the band as an international act. Last year’s “Because of the Times,” however, marked a somewhat change of direction for the band, by diversifying their sound, both musically and lyrically. Their music became more deep and expressive, not necessarily darker, but definitely more serious. They still rolled out southern barnyard rockers like “Charmer” or “Fans,” but nothing near “Four Kicks” or “Rodeo,” and this might’ve sadly alienated a portion of their fans; which is a real pity since “Because of the Time” is a real gem!

While “Because of the Time” and 2007 saw the Kings of Leon become ever more popular (see the Glastonbury gig they headlined, that sold out within hours), this year’s Only by the Night sees the Southerners turn into a veritable arena rock band. Now, who would’ve thought, back in 2003, the bearded ‘Southern-Fried Strokes,’ as they used to be tagged by the specialty press, would change from Allman Brothers lookalikes to the Nashville U2.

Only by the Night starts off with one of the best openers I’ve heard in a lot of time, Closer, a song that also puts KoL into new spotlight. It’s a really dark, psychedelic-like track, featuring some cool synths on the background, ensuring a rigid atmosphere, while Caleb unleashes some really chilling vocals, before the song finally climaxes in a barrage of guitar medleys. The other three songs that follow, next to the opener, could be considered the highlights of the record, forming the radio friendly half of Only by the Night, the other half, though, shouldn’t be disregarded as well, far from it.

Crawl is probably the most Southern song out of the whole bunch, with an awesome swamp rock vibe attached to it, that just makes you wanna dance in the mud or get yourself dirty somehow. Ok, maybe not that far, but still a very slick song. The first single, Sex on Fire, is sorta like a new wave rocker, that’s just waiting to burst into a explosion of guitars and noise, which it eventually does.

“We’re gonna set this fire we’re gonna stoke it up/ We’re gonna sip this wine and pass the cup/ We’re gonna show this town how to kiss these stars,” is what Caleb signs in the feel good ballad Manhattan, a song that somewhat sets the tone for the rest of the album. Use Somebody feels like it’s off a romantic film’s soundtrack, with steady beats and a warm, catchy chorus sung in a trio by the Followill brothers.

The album carries on with the lonely Revelry and the Richard Marx like love confession of 17. Be Somebody and Cold Desert end the album just perfectly. Actually Cold Desert may just be the most soothing song they ever did, a sonic landscape, inducing listeners into a very calm, serene state, before exploding into an outro. Seems they’ve got a thing for loud choruses. Actually, much of the record has been written by Caleb while on pain killers, after a fist fight with his brother Nathan. The drug induce state, sais Caleb, led him to write ‘the best songs in his career,’ and the most psychy stuff, I might add.

All in all, “Only by the Night” is an awesome addition to they’re florescence, so to be huge discography, even though it’s sorta a change of direction and contains more stadium friendly tracks then a Wembley Foos gig. That’s music, it has to evolve and change pace, so that it suits the artist’s feelings.  I for one welcome KoL’s new arena ventures, since they’re actually writing U2-like songs without being overly pretentious and pompous.