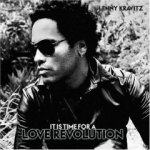 Well the first thing I thought about when I heard about the album was that he’s still single, so what kind of revolution is he talking about?(bad joke, I know). Anyway, this album was intended to be a classic, but the thing is that most of the time it lacks originality. The lyrics are a bit shallow, and it sounds as if he doesn’t believe in them himself. A strange decision was to use backup vocals almost anytime it was possible. Now don’t get things wrong, the songs are very good! It’s just that they fail to bring anything new or better to his previous work. If you have his previous records, it’s probably better not to buy this one, but if you don’t, it’s a great place to start. In fact, if this album had been released years ago, it would have been fantastic. But now, it sounds similar to this previous work. But he still has some brilliant musicianship with fuzzy riffs which catch on and grow on you. His funky psychedelia sounds better than ever, and the vocal effort is worth it.

Opener “Love Revolution” busts out a vibe that lingers, and old school rocker which…well… rocks! The drums and guitars scream as they are abused, but it all sounds just great! “Bring It On”, “I Love the Rain” and “Dancin’ `Til Dawn” sound really nice, and the guitar work is again fantastic, and the lyrics are decent. Another interesting thing he does is to sing love/marriage tunes such as “This Moment Is All There Is” and “Will You Marry Me?” not slow and tender, as almost everybody does, but instead goes for an upbeat way of singing them, and it’s really nice. A track with great lyrics but poorer musicianship is the ballad “This Moment Is All There Is”, the only ballad here. All in all, the songs are complex, and there’s a little bit for everybody here.

Now the lyrics are shallow because the purpose of this album is to move the masses; it’s not subtle, it’s not about giving you a fuzzy feeling or implying something to you. It’s about feet stomping, fist pumping and crazy heart beating feelings. It’s about the bad and good things that happen to you, most of the time without even noticing it. It’s about the world we live in.