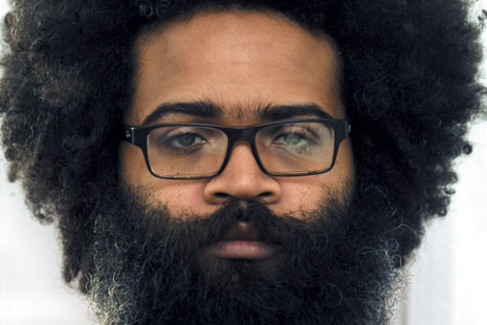 If some of you became a bit disheartened upon news of TV on the Radio hiatus, know that Kyp Malone’s (vocals/guitar) debut solo album, released under the Rain Machine moniker, sounds and feels like a genuine TVotR record. Sure, it’s a deeply intimate and personal record, packed with influences and issues addressed by Kyp, but the vibe while spinning it is so strangely familiar that there isn’t any doubt in my mind – it’s TV on the Radio with a twist… and a damn freakin’ extraordinary beard on top of it. His recently released music video for his first single, “Give Blood”, dwells a bit farther from the bohemian Brooklyn pubs you’d think Kyp and TVotR company would frequent, to a nice and clean hotel room, where we find Kyp, just chilling. Chilling, that is, before a fucking bleeding elephantine creature walks in. Mindfuck moment of the day! I swear, though, that beard is priceless. Seriously, have you seen a more badass beard in the scene, besides ZZ Top, of course? Rain Machine is out now on Anti-.