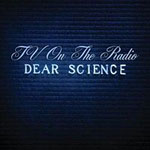 Tv on the Radio: Dear Science

You can easily hate this record from the first listen and I will not be the one to judge you. In comparison to ‘Return to Cookie Mountain’, the band’s previous effort, ‘Dear Science’ is more mainstream, more accessible and even more pop. But don’t hurry up labeling it. Just give it a couple more spins and you’d find out that this new lighter sound and shining clean production (courtesy of David Sitek) works just perfect, especially when you have to deal with such a variety of music styles.

Opening up with an up-tempo dark electronica (‘Halfway Home’), we’re then treated to the funky ‘Crying’ with Kyp Malone’s falsetto on the top later to be haunted by wicked soul (‘Stark & Owl’) and some sort of trip-hop (‘DLZ’). But it’s really the ‘Dancing Choose’ that is just so catchy and hard not to like. Blame it on Tunde Adebimpe’s attempt to rap, handclaps and horns or the whole dance mood of the song but it’s hard to disagree that this is one of the two outstanding tracks on the record. The second one being the ‘Family Tree’: the quiet, intimate, string led tear-bursting tenderness.

Lyrically it might be their best and most optimistic effort so far. Mixing up themes like love and war through the whole record, ‘Red Dress’ might be the crossroad of the two with its sexy ‘sharpen beat meet guitar’ sound and lyrics like: “I’m fat and in love/ and no bombs are fallin’ on me for sure/ But I’m scared to death/ that I’m livin’ a life not worth dying for“. And even though the ‘Love Dog’ finds Kyp whining and lamenting the closing track ‘Lover’s Day’ sends out a positive message while musically sees the band returning to their old epic tricks.

‘Dear Science’ sounds like a chaos at first, later to be discovered that it is thousands of everything put into one but to your and my surprise – it works! Like it or not this band still sounds like nobody else out there and with this record they’ve proved their ability to top themselves one more time.