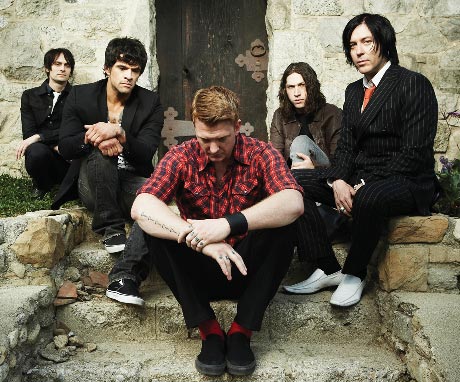 The guys over at Queens of the Stone Age are usually pretty mysterious about their future plans, but they’ve promised an extensive world tour in support of their long-awaited new record “…Like Clockwork” which is out in June.

No official dates or places have been released, but the band promised to hit the road in a big way, after spending so much time in the studio and away from the fans. What we do know is that they’ll probably be hitting several festivals, including Download in the UK, Peace And Love Festival in Sweden, Roskilde in Denmark, and Benicassim in Spain.

But not everything is pink and roses in QOTSA – today, they announced that former Mars Volta drummer Jon Theodore will join them on the road as their full-time touring drummer, replacing long-term QOTSA drummer Joey Castillo. But on a happier note, Arctic Monkeys singer Alex Turner has been announced as a guest on the album, joining the likes of Dave Grohl, Trent Reznor and Sir Elton John among many others.

I don’t know about you, but this tour sounds like perfect opportunity to catch them live before they lock themselves in the studio for a few years.