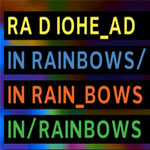 Got up earlier then usual this morning, but the sudden lack of sleep has been complemented by the explosion of energy with which “In Rainbows” hit me. I received [tag]Radiohead[/tag]’s latest gem in my mailbox at around 6 AM, for a fair fee (??$), and was immediately hooked by the 10 track marvel. Although most of you received the album for free, it seems to come at a price: audio quality. “THE ALBUM WILL COME AS A 48.4MB ZIP FILE CONTAINING 10 X 160KBPS DRM FREE MP3s” – that’s what the official order email states. Although this may seem quite low for those of us who look for the best audio quality in our mp3s, It doesn’t spoils the magic of “In Rainbows” in any way. If you want to experience the LP in it’s true splendor, you may want to wait for the release of the disc box in December, or CD at the beginning of 2008.

“In Rainbows” kicks off with what may just be their best opener yet, in the form of “15 Steps”, a beat heavy infused song that some of you RH fanatics may recognize from the band’s last tour. The next song that follows is another live sampled song, called “Bodysnatchers,” a song that’s all over the In Rainbows teaser posted by the band at the beginning of the summer, but which doesn’t really grow on me.”Nude” is without a doubt one of the best songs of IR, a ballad with which Radiohead have been tweaking and constantly perfecting for almost 10 years now, reminiscing the old OK Computer days; Thom Yorke is stunning at this point. “Weird Fishes/Arpeggi” is a classic upbeat Radiohead song, starting off with a ascending keyboard piano line, which is soon joined by the rest of the band with acoustic and electric guitars, distortions and the ever present Thom York, who doubles himself by adding a second harmonic voice of himself on the chorus background.

“Faust Arp” is the only new and unheard track of In Rainbows, apart from the June teaser (those of you with a fine ear may know what I’m talking about). It’s a somewhat psychedelic acoustic ballad, with swirling harp notes and violin crescendos on the background; as the title suggests it’s seems to be a Goethe’s Faust interpolation. This brings as to one of the best piece Thom Yorke has ever written: the one sided love song “All I Need”; a extraordinary work of art, musically and lyrically starting off with warm synths and bass lines, continuing with keyboard lines, before melting down into a explosion of riffs and cascading distortions.

Subtle guitar chords, rhythmic drumming and Thom Yorke’s swirling signature vocals can be found on the mid-album song “Reckoner,” a incarnation of the long lost classic from Kid A days, present as a whole different version from what fans were acquainted to. The most relaxing song of IR is clearly “House Of Cards,” tropical like calm steel drum sounds in the background, subtle distortions and a laid back Thom Yorke, makes this a perfect lullaby or meditating song. “Jigsaws Falling Into Place” is a fast paced, thrilling song, initially known as “Open Pick” in earlier live versions, that starts off a bit shy, but eventually picks up revealing a passionate and enthusiast Thom Yorke.

“In Rainbows” comes to a epic closure together with “Videotape,” one of the most deepest Radiohead songs there is; it concerns a man reviewing his love in retrospect, it’s a prayer or meditation that his love will in some way be eternally recorded by and echoed throughout a sympathetic Universe. “In Rainbows” truly is a worthy addition to the legendary Radiohead catalog, an amalgam of breath taking and emotional songs.It’s a revolutionary one as well, through it’s eccentric view upon album sales, marketing and over all promotion it will remain as a example of independence for future bands and hopefully it will spark a wave of rebellion against the giant labels monopolies everpresent over the mainstream.