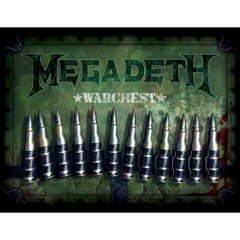 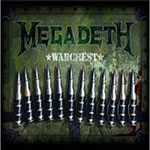 The tracks here are hand selected by frontman Dave Mustaine, including 30 audio and video tracks making their global release debuts, and an additional three tracks that have never before been released in the U.S. They have been cleaning out the vaults lately. This includes digitally remastered album cuts, soundtrack and compilation songs, unreleased live and studio performances and interview clips spanning more than 20 years. Disc 4 of the set is a live show from a night on the 1990 “Clash of the Titans” tour. The DVD is a 1992 concert recorded at the Hammersmith Odeon in London.

The tremendous amount of music and video is filled with a “vac-u-form” packaging with a 3-D ammo belt on its front and a 36-page booklet with an essay by author Ian Christe along with a discography and a lot of photos. The fact that they include unreleased stuff that makes it worth buying even if you already own everything Megadeth has put out. It is not cheap but for the huge amount of things they give you it is worth it.

Disk One is about their debut release Killing is My Business…. And Business is Good. It is remastered and it sounds strange but nice because the sound is a bit better. It is somewhat a different album. Peace Sells is there just as hard and convincing. Disc: 2 has probably the most favorites that band listeners should have. “Strang Ways” is a very good Kiss cover and the live tracks sound good and are well recorded; disc 3 has a better “Duke Nukem Theme” than what you have listened to before. The disc 4 has truly breathtaking tracks performed live. “It’s Electic” is very good and this shows that it is underated. “Devil’s Island” shows that Dave’s voice is better than most believe and he can truly sing aside from shredding.

So people know that Megadeth is a kick ass band that brings metal to the people for more than two decades. This is another way to show that they are among few bands that can muster gas up this kind of solid work. It shows Mustaine in all of his metallic glory, surrounded by first rate musicians. To the people who have their songs this is worth it for the demos, session takes, and the other things they give.