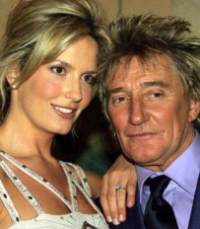 We have ROME. Not us but British rocker Rod Stewart has. The news reports in in Italy say that he married model Penny Lancaster.

The private ceremony was in Santa Margherita Ligure, just outside the posh Portofino resort on Italy’s northwestern coast. Not to many downsides when you are a huge rock star even at 62. That is Rod Stewart. Lancaster is 36.

The wedding was not big; just friends and family. It was held at a 17th-century villa. The singer has style that is undeniable. After the ceremony, the newlyweds went back to a yacht just off the coast where they have been staying. They also have a child together.

The singer had many hits. For his third wedding his best known “Do Ya Think I’m Sexy?” is a bit rhetorical.