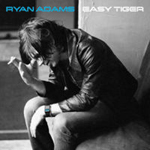 A lot of things can be said about [tag]Ryan Adams[/tag], yes he is/was a drunk, coke-head, he himself confessed that he’s very much amazed of still being alive, but one thing can not be denied, he is a great songwriter.Adams wrote songs for all the moments of ones life, songs for when your down, happy, in a mood to drink your head off, dance, heartbroken etc.He’s been criticized by a lot of people for being inconsistent and because he has no quality control, here i have to agree with them. He actually just records everything he writes , which results in patchy patchworks, alongside brilliant masterpieces. This fact is actually proven by his high number of released records from 2000 till now, numbering an astonishing 9 LPs (3 of which were released in 2005) and that’s with out counting the 11 albums he put on his website for streaming last year.

“The boy wonder” as he’s called, now reaches his 9th studio installment “Easy Tiger”, an album that i find to be his best one yet! It’s an album that doesn’t sound quite the same as his previous work, actually every song from this new LP sounds in some way different, it shows that Ryan actually worked on this album and gave his best. Easy Tiger is packed with semi-acoustic ballads that channels an array of influences sad country, even sadder pop, and whiskey-soaked mid-tempo rock. The same influences can be felt in the lyrics, trying to make sense of love and its companion, pain; drinking and regretting.

The album debuts with its opening track “Goodnight Rose”, based in a twangy electric guitar and Adams’ voice plays to the bustling, drinking-infused side of him. “Two”, which has been released as a single, features a harmony vocal by [tag]Sheryl Crow[/tag] intertwined with the one of Ryan Adam’s. At first i thought this mix will be garbage, but guess what? It’s great!

“I Taught Myself How To Grow Old”, in my opinion, is the albums leading track. Ryan’s beautiful vocal skills a put to good use in this melancholic anthem, with high pitches of brilliant melodic value of longer notes, fact that suggest a loss in the artists heart. Poor little rose beaten by the rain / In the wind, in the gale, thunder, and the hail / Sometimes I feel like I’m going insane / Without the numbness / All the pain, so intense to feel / Especially now, it added up through the years / And I taught myself how to grow / Without any love and there was poison in the rain / I taught myself how to grow / Now I’m crooked on the outside and the inside’s broke.

The 2 year break from his album spree seems to have done Ryan Adams a great deal of good, as he manages to create a memorable record in the form of Easy Tiger. Give this album some time and it will sink with you, it worth the listen !