Keep Me In Mind Sweetheart by Isobel Campbell & Mark Lanegan 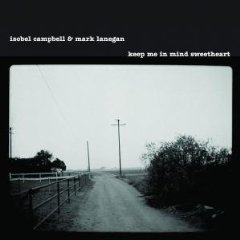 Comprising of leftover material from this year’s excellent Sunday at Devil Dirt, Keep Me In Mind Sweetheart continues where its predecessors left off – acting as a contemporary film noir soundtrack with Lanegan crooning like never before while the musically adept Campbell purrs around him.

Opening with the upbeat title track, this six song recording is influenced by the classics of American country, with this influence most evident on ‘Ramblin’ Rose’. ‘Fight Fire With Fire’ is one of the stand out tunes to feature here. Although unfortunately not a version of its Metallica namesake, the song sees Lanegan on fine form and Campbell’s dulcet tones act as a mellow contrast. The EP closes with Campbell flying solo on ‘Hang On’ and the listener is reminded that her male counterpart is the true gem of this recording project.

With Nancy & Lee comparisons predictably being levelled at this unlikely duo, the reality is that the chemistry between the pair falls flat in places. The former Belle & Sebastian founder’s vocal abilities are simply not strong enough to act as a foil for Lanegan’s trademark soul-searching tones, as recent live reviews have also testified.

Keep Me In Mind Sweetheart lacks the polish of Sunday at Devil Dirt and the sophistication of the faultless Ballad of the Broken Seas, having more in common with Lanegan’s first dalliance with Campbell on the understated track “Why Does My Head Hurt So?” While this is hardly a criticism, it is hard not to feel like this project has rapidly climaxed, with nothing new emerging from the latest encounter. In terms of Christmas stocking fillers, one could do worse than buying this EP as an introduction to the work of the pair or to satisfy your thirst for more Lanegan material. After all, the man could quite literally sing the phone book. If you have lost faith in current music or have a thing for those effortlessly cool 60’s soundtracks, then this is the record for you.