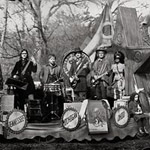 The Raconteurs - Consoler For The Lonely

Two years ago Jack White announced his latest side project, The Raconteurs, with a bang, after the group’s debut record “Broken Boy Soldiers” was very well received. Partly, of course, because of White Stripes‘ high notoriety and cult like following. Now, the band has reached record number two in the form of “Consolers of the Lonely.” First off, I think it’s better you try to erase any preconceptions and previous notions of The Raconteurs from your head, as this sophomore release is significantly more different then anything they’ve put out before. Broken Boy Soldiers had a set sound that carried though the entire listen, which although was great and catchy, tended to get highly repetitive after a while, Consolers however is so beautifully diverse, packed with tons of different kind of tunes from 70’s classic blues, to garage rock, to pretty pop.

I was pretty much shocked (in a good away) when I first listened to the album by how much The Racs have evolved and changed in musical direction, drifting from comfortable mainstream mainland towards more shallow uncharted areas. The way they promoted and announced the album was also very strange, as much as very cool, with only a week’s notice before the official release date. It’s that kind of spontaneity that manifests itself both in their music and real life, making The Raconteurs so beautifully unique.

The first thing you’ll notice after you finish the record’s first spin is it’s a lot more diverse and pumped up. You can feel the high energy levels from a mile away. I especially enjoyed the mix of different paced songs, some more fast (White Stripes style), while others a bit faster, cooler, more bluesier and retro like. Actually speaking of retro and blues, if you wasn’t really aware that the Racs are actually a contemporary act, I bet you a pint you’d say the band’s a ’70ish blues/garage band, that you can’t quite pinpoint. I’ve read a few reviews of the record, to see how other fellow critics perceived their new music, and, besides the constant White Stripes comparisons that began to grow irritating, I was a bit disheartened to read that a lot of reviewers found Consolers’ retro blues a bit of place, invoking temporal differences. Let me make something clear: there’s nothing wrong with rehashing old school styles, just as long as you do it well!

Consolers opens up with the title track, a fun song packed with typical Jack White humorous lyrics about seclusion, isolation, sympathy, laziness and boredom. The album’s lead single “Salute Your Solution” sounds a bit like a Angus Young riff fest, in which Jack and Brendan Benson each takes turns on vocal duties. “You Don’t Understand Me” is one of the record’s most beautiful song, featuring calming piano-pop notes, harmonizing Queen like uh-ohs and chorus repetitions on the background, demonstrating the band’s creative capabilities are far from limited.

The groups Zeppelin influences are extremely well materialized in “Top Yourself,” with Pagesque hooks and riffs, with a slowly unfolding slide-guitar attack and an unexpected banjo. “These Stones Will Shoot,” is another song baring striking similarities to those form Led Zeppelin, resembling ” Your Time is Gonna Come”. Consolers comes to a epic halt onces as “Carolina Drama,” a Dylan-esque narrative epic, starts unfolding out, telling the story of a murdered preacher and a fatherless milkman. It’s definitely the funnest track to listen to.

With “Consolers for the Lonely” The Raconteurs have certainly managed to step up their game tenfold and proved once again that their a very talented bunch, that’s just waiting to reach its fullest potential. Jack White’s storyteller specialty, that’s been often unjustfully overlooked, is as evident as ever. Also thanks to the expanded lineup and instruments, he’s now able to better musically express himself, fact most evidently clear in the string parts, where Patrick Keeler (drums) and Jack Lawrence (bass) did a fantastic job as a rhythm duo, of which even Meg White might take pride. If you’re a Stripes fan and you enjoyed every second of Broken Boy Soldiers, then this is a must have!