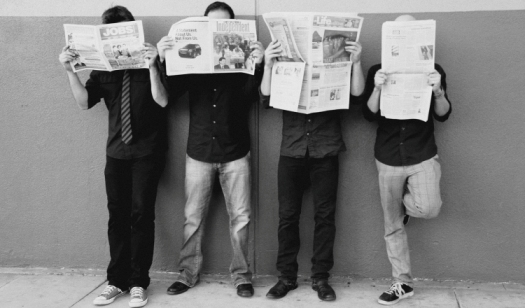 So I was mailing back my Netflix pick (The Postman Always Rings Twice) last week and I couldn’t help but think Film Noir is so damn cool. With all the Femme Fatales, crooked cops and spies running around it puts you in the mood to be mysterious.

That’s what I enjoy about the Los Angeles based band The Spies. They get that cool and mystery go a long way, probably because two of the band members are actors. The band also doesn’t mold itself to the stereotypical-trench-coat-wearing Spy either. They transcend the limited image with their music.What does a noir band sound like? You may ask. Well, in this case it’s less smoky jazz and more melodic rock with a vintage feel, mostly due to the instrumentation. “You Got Some Nerve” is a prime example. The song would fit perfectly in a Neo-Noir montage or scene that involves creeping around due to its creepy piano part.

What I really appreciate about their last release Televolution is that The Spies take their melodic rock to different places and make each song is different from the others. Some of the band’s songs are danceable and bursting with energy like “Bang Bang” and “It Comes In Waves.” While others like “Radio Caller” and “Lavender” are more subdued. Sometimes The Spies sound like Spoon, while other times their music feels more like U2, but the band always manages to sound like themselves even when they’re paying homage to another band.

I recommend giving them a listen, and if you’re in LA, check out one of their upcoming shows:

Go to WeAreTheSpies.com or find them on Facebook for more info.