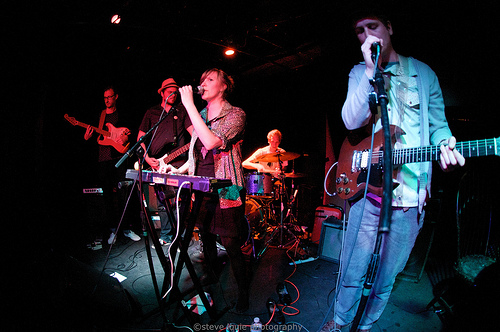 ZME: A simple, maybe a little dumb question first: why did you call the band „Springfactory” ? A short description will do.

We saw a sign outside a factory that read ”Welcome to Springfactory” We just thought it could be a good name for a band. This was before we had even started a band together.

ZME: Springfactory is formed by Lina Cullemark, Peter Gunnarson, Daniel Holmström, Magnus Svedjebratt and Mikael Hall. Could you each please do a little description of yourselves. It doesn’t have to be longer than 5-6 words, each. What best characterizes each of you?

Magnus: Guitarist and computer know it all.

ZME: You have released two EP’s in the past and these have completely sold out. Afterwards, Series Two Records released a 10 song CD, which contained all the songs from the EP’s, along with a couple of new songs. Why did you include the EP’s in a new CD? Why not a totally new album? What was the purpose of it all?

It was Series two´s idea and to be honest, we didn´t have anymore songs recorded. None of the EP´s had been released in the US so we thought it could be fun.

ZME: The Springfactory full length compilation has been released as a limited edition. I’ve read somewhere, that only 300 copies have been pressed. Why such a small number of copies? Is the album still available now for purchase somewhere?

I think you can still buy it from Series two records. I actually don´t know if they´ve sold out or not. We´re a small, unknown, not very productive band so we thought 300 copies should be enough.

ZME: For Peter Gunnarson – You are also a member, well the other half of „Suburban Kids with Biblical Names”. How does that work? Don’t get me wrong – the fact that we get such good music from both places is wonderful. But how can you equally take care of both bands? Give us a couple of differences between your experiences with both of them please and tell us the gist of the story behind all of this: why did you also join Springfactory?

Its not that different, I play in both bands because I enjoy making music with both Lina and Johan. I have never made music as a part of a bigger plan, only because I love it and need to do it. And as long as that is the case, it will work fine.

ZME: Give us a couple of influences to the band please. What other bands/solo artists have influenced you the most? What familiar sounds should we recognize in your music?

Here are some bands/artists we both like very much:

ZME: In my opinion, the three most beautiful songs are „Stingy Friday Afternoon”, „Little Trouble Kids” and „Peggy Pear”. Could you tell us the story behind the three? Who wrote the lyrics, who plays what instrument for each of them and what is the concept behind the songs. As much as you can tell – it’s all going to be deeply appreciated.

“Stingy Friday” is about jealousy and how you should try and turn that feeling into something positive and get inspired by the people instead of envy them, cause that´s just a waste of energy. It is one of the first songs I made for Springfactory. “Little trouble kids” is about being worried about your friends and “Peggy pear” is basically about standing up for yourself. I wrote these three songs. And Peter played all the instruments on the recordings. Usually we make a part each and put them together to a song. I always write the lyrics and Peter plays most of the instruments on the recordings.

ZME: I’ve checked your MySpace page for future concerts, but there was nothing there. When can we expect to see you touring? And not just in Sweden. Be fair and have a tour around Europe soon. Also, even if it’s a long shot, when will you plan a performance in Romania?

Peter is in Uganda until Christmas, so there will be no live shows before that. And I think we won´t be playing much live until we´ve finished some more songs. But Romania would of course have been great!

ZME: You’ve attended the NYC and San Francisco Popfests. Tell us a little about how that went. How was it to perform next to all those other talented pop bands? Also, I’m curious to know how Peter managed to perform for both bands (also SKWBN), as both bands attended both festivals?!

It went alright. We had a lot of fun even though we weren´t very well rehearsed. It was me and Peter playing with the Suburban kids-band. I also played with Skwbn and it was no problem to manage playing with both bands. We even had time for some sight-seeing.

ZME: Please mention 10 other indie pop/rock bands you like listening to when you’re at home, relaxing, or working, or doing chores, etc.

ZME: Let’s imagine the perfect party. Mention 10 tracks you always want to hear, in order for the party to be a successful one:

Jap Adaptors- I am an ant

ZME: If you could choose the list of performances for a festival, whom would you love to see performing, next to your name? You can ignore time frames and choose bands that aren’t performing anymore. Give us just a couple of names…