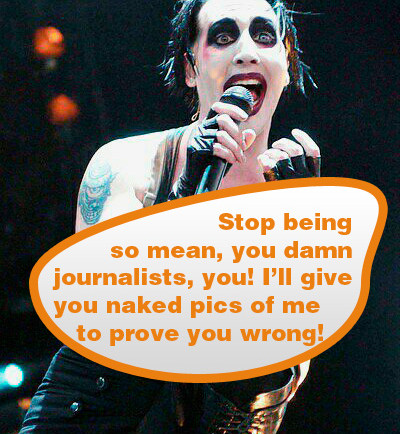 Marilyn Manson is a fucking cunt! 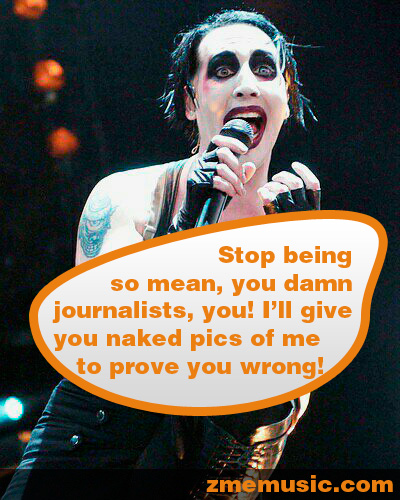 I don’t know why this even surprises me, but I guess it’s worth point out what a shy, crying little girl Marilyn Manson is. He is, really, take a look at his latest blog post on myspace.

I can, but do not need to defend myself And the absurd accusations that the average press has clinged onto. If we need a nude photo of me to prove that I am far different than the soon-to-be-murdered-in-their-home press has decided to fabricate, that is easy. But if one more “journalist” makes a cavalier statement about me and my band, I will personally or with my fans help, greet them at their home and discover just how much they believe in their freedom of speech. I dare you all to write one more thing that you won’t say to my face. Because I will make you say it. In that manner. That is a threat. Mm

Very macho, MM. Enticing a whole brainless, most probably under 15 and childhood molested, cult following that you pose under your wing against media is the right thing to do! Just take a look at a few of the 1635 comments on the respective post.

“I kind of wish to see someone have a press raping spree on slipknot.  Talentless…”

“I will worship your feet good sir”

And this crap goes on for ageeeees. Congrats on assembling an army of 50 pound teens. That’s showing those pesky journalists. Who are they to say your new album sucks midget balls or that you’re a paranoid crack head? Yeah, you show them, grab an axe and stick into the first dude that writes shit about you in the local newspaper, bitty blog or myspace. But you won’t do that – instead, you’re just emoting over the internet like any other pathetic looser you so bluntly often accuse.

Disclaimer: I am in no way bashing Mr. Manson. I heartily respect him, both as an artist and person, and feel these doubtful remarks of the press over Mr. Manson’s music, personal life and even higine are totally unfounded *cough. [please don’t track down my IP address. I care about my life.]