Since her sudden death of July 23rd 2011, Amy Winehouse has been the focus of more tributes than can be counted. From Bruno Mars at the VMAs to Green Day at their secret show, quite a few high profile artists have thrown their musical hats into the ring of Amy tributes. Not to say all of these aren’t sincere, but the truth of the matter is that most of these artists had most likely never been as affected as a true Brit. That’s where Matthew Beer’s Fallen Asleep is different.

Born in Birmingham, Matthew has been a songwriter since the tender young age of six. Although never what we may define as  famous, he was featured in the Times newspaper after performing at the National History Museum of London’s Blue Whale Room. So let’s get to the point: why does this ‘commoner’ stand out so much in the midst of A-list tributes? 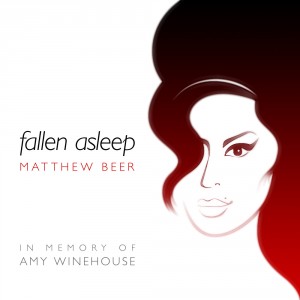 After coming across Matthew via twitter, I figured I’d give him a quick listen. From the first note of the gorgeous (to put it lightly) piano intro of Fallen Asleep I discovered he wasn’t the ‘commoner’ I thought he was, but a man with monster talent but little to no exposure. His voice paired with a piano and string combo can be described as mystical, his lyrics containing the perfect amount of sadness. With my ears perhaps the happiest they have ever been, I knew I had to contact the man behind the arrangement, lyrics, and beauty. What must inspire a fairly normal guy to write something of this caliber?

“I was able to pay my respects at her home in Camden. Although there were lots of people there, it was respectfully very quiet. The emotion of it all, and my realization of the loss of such a genuinely great musician really affected me more than I anticipated,” Matthew explained to me over twitter. “When I got home, I started to write Fallen Asleep for no other reason than a way of me expressing how I felt at the time.”

After fantastic reception from many Amy Winehouse fans, Matthew had an idea. “The fact that Mitch Winehouse started the Amy Winehouse Foundation for young people with addiction problems, made me think perhaps I can make a small difference.” Although his initial attempts to contact the foundation to find an established musician to perform his song were unsuccessful, Beer decided to take the matter into his own hands. “I decided to release the song on iTunes myself. If nothing else, I hope to raise awareness of the foundation and for alcohol and drug addiction. If I could prevent just one person from going down that path of addiction, that would be great,” later adding that ALL profits would go to the Amy Winehouse Foundation.

Talented, selfless, and normal, Matthew Beer is definitely one that I love supporting. With just one dollar and an iTunes account, there’s no doubt in my mind that all of you will love supporting him as well.