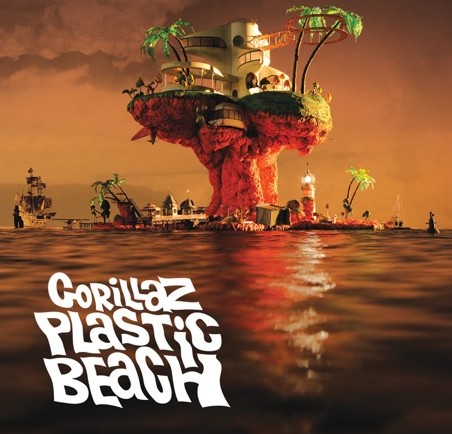 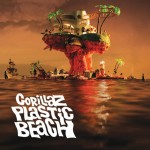 It appears that the the self-titled debut of Gorillaz was the induction of the 21st Century into the popular culture, ya know before all that nasty terrorism and war stuff. Its follow-up, Demon Days, was a reaction to all of the  post-9/11 fallout, a record so full of wonderfully hyperbolic paranoia that it almost strangled the hope out of you. Now we arrive at the newest Gorillaz offering, Plastic Beach, a reaction to the reaction.

This time, the reaction comes from a change in the worldview. Yes, the world is still fucked up in the eyes of Damon Albarn but it isn’t worth constantly worrying about it. So, he swapped one problem for another  – commercialism and environmentalism for terrorism and war. Yes, terrorism is still an issue – as are the multiple wars being waged (supposedly) because of it – but the initial shock of it has worn off and the fog of this monolithic singularity has cleared. This, in turn, has allowed him to focus his energy on other topics. Thus, we have the obviously titled Plastic Beach, a name that doubles both as an environmental cry and a synonym for America. And since the issues discussed here are, let’s say mellower, than terrorism, the music must also follow suit.

The mood here is, quite simply, chill. This is music meant to help you sit back and groove. That’s it. It’s fun but not in the way that Gorillaz was. That record’s amusement owes its existence to the multitude of genres attempted. It was a cacophony of flavors from which to choose; it was a buffet of sound. Plastic Beach, conversely, is a single, unified piece. Consequently, its enjoyment is based upon the ambiance initiated from the outset and maintained throughout. While it shares this characteristic with Demon Days, the music of Beach is Days‘ antithetical counterpart. Days was anxious and tense; Beach is calm and relaxed. Every song floats upon a simple beat and swirling synth stacked upon swirling synth. The lush, soft-palate feel is the key to this set of songs working as a fully realized album.  “On Melancholy Hill” and “Rhinestone Eyes,” as examples, engulf the listener in rich aural waves. Honestly, the album is like a fanciful feast of drug-induced haze.

Within this mist is, like previous outings, a plethora of guests, most of which are worthwhile. Lou Reed’s hypnotic talk-singing on “Some Kind of Nature” oozes his bad-ass charisma. Mos Def exudes cool as he swiftly dances around and through the electronica-infused “Sweepskates.” Yet, it’s Little Dragon who steals the show on the fantastic “Empire Ants.” The dreamy cut, co-written and co-sung by LD member Yukimi Nagano, is the best song on the album by a wide margin with the out-of-nowhere jittery second half.  Snoop Dogg’s appearance on “Welcome to the World of the Plastic Beach,” sadly, is the only miss here. He sounds as if he half-assed it. To that end, it seems like he’s on the track purely for the sake of being on the track. It’s an unfortunate blemish on an otherwise perfect guest list.

That Plastic Beach is Gorillaz’s least accessible record, while simultaneously being their best, is a demonstration of the talent that lies behind the cartoon. While the “band” started out as a a way to have an artist become a multimedia experience – and, therefore, risk becoming a gimmick in the process – it evolved into a legitimate outlet for Albarn (and company) to enter the pop music world and make music that’s better than anything else found there despite anyone’s ability to classify it. Indeed, all of this is just a dense way of saying that Damon Albarn is, purely and simply, a genius. Because of this unmitigated fact, Beach is the best record you’ll hear all year. That’s a guarantee.