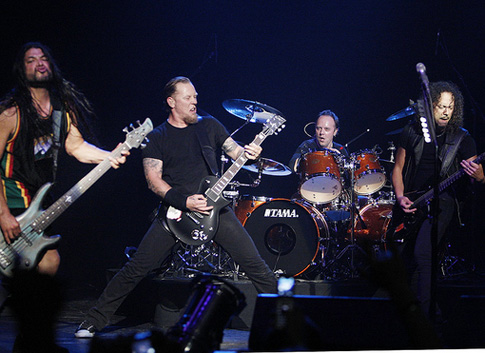 This Wednesday the trash metal icons, Metallica, performed live in a benefit concert in Los Angeles for Flea’s music school for kids, the Silverlake Conservatory. The performance was the band’s first one in almost one year, but the quartet didn’t sound rusty at all, by all means they were highly energetic. The almost 2000 fans (who paid as much as 500$ for the ride) gathered in at the Wiltern Theate, were treated to some of the band’s old-school material going far as the mid 80’s with hard riffs, screaming vocals and over all epic speed metal rocking.

“It’s great to be playing live again.” says james Hetfield before bursting into the set, that included almost all of Metallica’s smashing hits, from “Sad But True,” to “Ecstasy of Gold.” to “Fuel,” to the unmistakable rocker “Master Of Puppets.” No new songs from the highly anticipated forthcoming album, however, the band motivating as follows: “We’re not playing any of the new stuff. I don’t think this is the place. This is a benefit for Flea’s thing. We don’t want to grandstand with anything else here. There will be a time for that.”

Near the end of the night, the Red Hot Chilly Peppers psychotic bassist, concert benefactor and all round swell chap, Flea, joined the band on bass for the insanely fast “Fight Fire With Fire,” a speed metal classic from 1984. What a night for Metallica fans!

Before the set, however, our fellow blogging colleagues from Rolling Stone’s Rock Daily, caught up with Metallica for a quick set of interesting questions, that shed some light on the new album, its name, Rick Rubin (the new producer), the concert itself and a few more. Here’s an excerpt. Check out the rest of the interview at RS.

What was the idea behind making this album?
The direction is embracing our past in the now. We know what we know. It’s hard to erase that. But to strip it down again, and get back to why we’re doing this? Why did we write songs that way? The template was Master of Puppets and the strength of that record. How can we do that now?