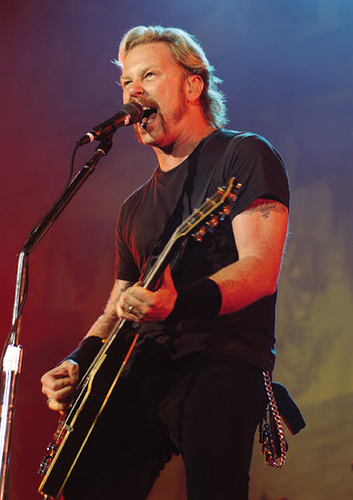 Is there a bigger musical event this year than the release of the Metallica album? Could be, but I can’t think of any other thing. They’ve got reclaiming, reconquering, and recreating to do – and that’s no easy job, even for them. After the disappointing not-so-impressive St. Anger, true fans are expecting a return to the roots; we’re waiting for the amazing music we know they can do. The amount of attention directed towards them is huge, but they can handle the pressure for sure. Things seem to be going OK, because after they’ve released some more details and Dave Grohl’s open letter to them, now they’ve released some footage of them working in the studio.

New “fly-on-the-wall” footage of Metallica in the studio working on its new album has surfaced on the MissionMetallica.com web site and can be viewed here: May 27, May 28. As we previously said, they’re working with Greg Fidelman — an engineer/producer who has worked with current Metallica producer Rick Rubin on some albums for bands such as the Red Hot Chili Peppers, System Of A Down, Slipknot and Audioslave. They’re working with him on mixing the CD.

Ulrich (who else?) speaks about the album:

There’s no confirmed album title, but Ulrich said they’re working with some media in order to sort this and the design out. They’ll also be headlining the Bonnaroo festival this year, so pretty busy period for them.

“We sort of promised ourselves that unlike all the records we made in the ’90s, [which] were just completely stressed-out and just nutty, that we were gonna try and have a little more sane environment — and we’ve actually, surprising mostly to ourselves, been able to keep to that,” Ulrich said, according to Billboard.com. “We’ve pretty much finished the music now, so all the next level stuff is just starting to go down.”

I’m not really sure if this is a good thing; I can understand that they’re at a totally different period in their lives, but still… I like nutty! I mean, who doesn’t? If you don’t like nutty, you’re not into Metallica. 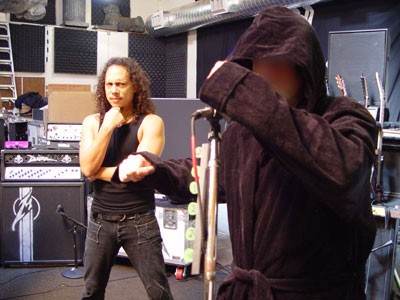 As it turns, out, they have some problems with the length of the tracks:
“These are long songs … we’re talking seven-minute, eight-minute, nine-minute nutty-ass songs,” Ulrich revealed. “We don’t make them long or short on purpose; you just kind of do what feels natural. We’re not really gonna edit them, (so) we’re gonna lose another one at some point in the next month or so and probably end up with 10.”.
According to him, the album is “definitely pretty all over the place. There’s a lot of variation, a lot of fast, slow, melodic … kind of hardcore, nutty super-fast speed stuff. It’s a little more like how some of the earlier records were a little more dynamic within the songs.”. For an album that’s not nutty… it sounds pretty nutty to me. Oh well, I hope know you guys will rock this time! You’re f*cking Metallica, and that’s why we love you!