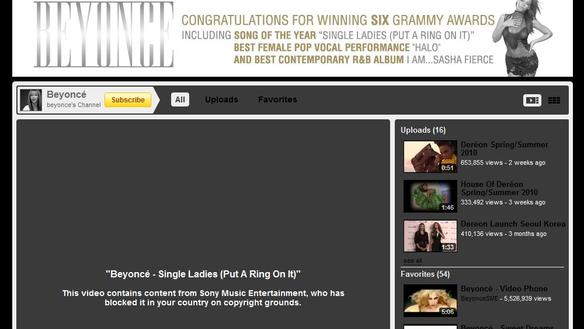 I just find the following story fascinating on so many levels. Sony Music is alleging that Beyoncé committed piracy due to her own music videos being on YouTube. Specifically, Sony is taking issue with “Single Ladies” existing on her official YouTube account. If you go to it, “Ladies” has been replaced with a disclaimer reading: “This video contains content from Sony Music Entertainment, who has blocked it in your country on copyright grounds” (with “your country” being the United States).

While there are many parts of this that are absurd, the most glaring piece has to be the fact that you can still watch the video on YouTube. You just can’t watch it via Beyoncé’s official account. You can even watch the video on the Beyoncé VEVO account.

I understand that Sony may be trying to save and/or squeeze ever last cent it can out of artists that still make the company money but this is just about the dumbest way to achieve such a goal. So what the fuck was the point?