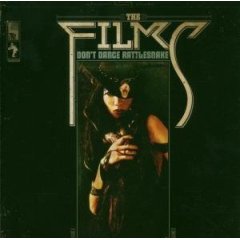 The Films is a band formed in Charleston, South Carolina, in the year 2003, that is currently highly rated by critics, despite the fact they haven’t launched an album till very recently. The band was formed by four high school acquaintances with different musical pasts: Michael Trent (Vocals, Guitar), Jake Sinclair (Bass, Vocals), Kenneth Harris (Guitar, Keys, Vocals) and Adam C. Blake (Drums).

After relentless touring from Atlanta to Nashville to Birmingham and back, the guys from The Films, have finally waxed twelve brand new hits wrought with spit, grit, attitude, despair, and charm.

The album is entitled “Don’t Dance Rattlesnake“, marking an effort that began with the early recordings in 2006 at The Loft studios in eastern Michigan. Through gruesome schedule they have successfully created an album in a time span that would take most bands skin up properly.

Check out the band on www.myspace.com/thefilms or www.the-films.com. Their UK tour starts on May 23rd and includes an appearance at the Wireless Festival.