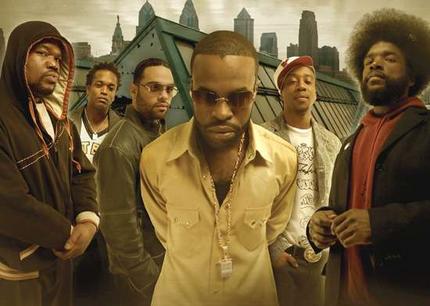 The forthcoming presidential elections have certainly affected us all for a while, even the likes of the Philadelphia based hip-hop group The Roots. Details concerning their upcoming tenth studio album, titled “Rising Down,” have just recently surface,  as band member ?uestlove calls the new record “probably our most political album to date, dealing with addiction, nihilism, hypocritical double standards in the prison system, and overall life in Philadelphia.” He soon follows-up saying Rising Down is “not a ‘downer,’ as most people expect us to do.”

If you’re still not convinced about The Roots’ political mindset, on the upcoming record, then how about this: the album’s name comes from from a William T. Vollmann treatise on violence, and its release date, April 29, is also the 16th anniversary of the riots that consumed Los Angeles after the police officers accused of beating Rodney King were acquitted. However the record tackles a bullshit topic, such as politics, that doesn’t mean the record won’t rock your fucking socks off. Just look at the guest list: Common, Mos Def, Patrick Stump (Fall Out Boy singer), Talib Kweli, Peedi Crakk, DJ Jazzy Jeff, Saigon, Styles P, Wale, and some weird duede that goes by the name of P.O.R.N.  Speaking about the album’s sound, this time, ?uestlove said:

[Rising Down] “is an electric record, more synthy. The darks are darker and the lights are lighter. But all I know is making quality hip-hop stylistically. We tried to do something we never did before. Kamal had to be the sacrificial lamb this time. The one instrument that has defined the Roots has been the Fender Rhodes. This is the first year he’s had to change his instrumentation and try other sounds out. We have a bunch of keyboards and synthesizers we’re using on this record. It feels like the musical equivalent of ‘Blade Runner’ sometimes. We’ve also added a horn section.”

Bellow you can find the tracklist and North American tour dates that will accompany Rising Down’s release.