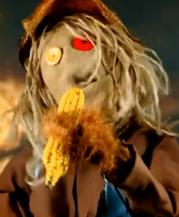 I call voodoo on These United States‘ latest video for the band’s infectious single “Everything Touches Everything.” Voodoo and all, you gotta admit that a charismatic scarecrow frontman, together with his skilled corn mates make up for one hell of kick ass band. They get a shit load of crows for groupies too. Life as a rockstar farmer is just awesome!

Off the band’s recently released new album Everything Touches Everything out now via United Interests.