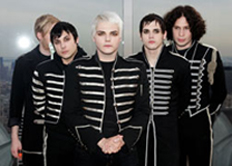 A few days ago goth rock star [tag]Marilyn Manson[/tag] released a shocking statement in which he publicly criticized [tag]My Chemical Romance[/tag], accusing them of ripping him off.

“I’m embarrassed to be me because these people are doing a really sad, pitiful, shallow version of what I’ve done.If they want to identify with me then here’s a razor blade. Call me when you’re done and we’ll talk.”

Marilyn’s “Mutilation Is The Most Sincere Form Of Flattery”, a new song on his Eat Me, Drink Me album, was especially writen for the Gerard Way fronted band. “Hey, there’s no rules today/You steal instead of borrow/You take all the shapes that I make/ And you think that you thought/All the thoughts that I thought/Don’t you?” (from the lyrics of the song )

Gerard Way responded to Marilyn accusations, releasing a statement in which he claims that the goth symbol’s little imputations are nothing else, and here i have to agree with him, then little airs of stardom and marketing schemes “We still haven’t found someone that has knocked us down that we need to take seriously. If Elvis Costello said we sucked we would think about it a bit but usually it is comments from someone with a new record to promote so the remarks ring hollow.”