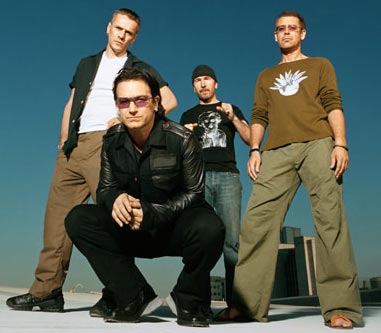 One of our most anticipated releases for 2009, U2‘s eleventh full studio release, has finally received a title and release date, after months and months of silence around the subject.

U2’s new album, “No Line on the Horizon,” is set to for a March 2nd/3rd release date (I’m not sure whether it’s on the 2nd or 3rd, yet. A lot of blogs have been mixing the date up, ’till now). The production for the record has been handled by the most capable hands of Brian Eno, Daniel Lanois, and Steve Lillywhite, although U2 originally recorded some new stuff in 2006 with Rick Rubin, which, apparently, never got to see the light of day.

U2’s last studio release was 2004’s “How to Dismantle an Atomic Bomb,” is considered by many, including yours truly, an awesome record, as well as a equally successful one, grossing over 5 million records in sales. Let’s just hope No Line will be at least as good as its preceding effort.

In other news, U2 has also been added to the War Child benefit album “Heroes“, out in February.

Oh, and here’s a list of a few rumored tracks, that might appear on the official No Line on the Horizion tracklist: