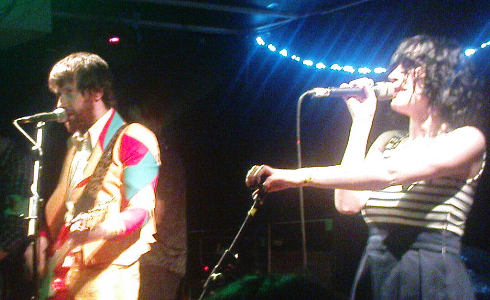 We’re three songs into Ham Sandwich’s set in Whelan’s, and the entire crowd is already covered in confetti and there are maybe ten beach ball-sized balloons being batted between audience and band. Everyone in the venue is either grinning madly or openly laughing. Ham Sandwich are clearly here to have some fun.

But wait: like a bunch of drunks in charge of a time machine, we’re getting ahead of ourselves. (That’s an old Mr. Biffo joke right there, guy.) The night started with a surprising set from talented two-man band, The Ambience Affair. Despite deceptive first appearances – the minimalist guitar/drum set-up ostensibly pitched them somewhere in between The Black Keys and Two Gallants – frontman Jamie Clark’s extensive use of loops gave the band a fairly unique range of sounds. In their short opening set, their songs ranged from impressively huge choral folk (somewhat similar to Fleet Foxes or the like) to frantic loop-based rock, more akin to what Liam Finn’s been doing. Clark’s slightly nervous patter with the crowd belied his clear, ringing voice when he let loose on songs like “Fragile Things” and “Vacant Hearts”, and his confident and intelligent use of loops certainly elevated The Ambient Affair above your average guitar troubadors. Wonderful stuff.

Appetisers finished with, now on to the main course: Ham Sandwich. (Come on, you knew I was gonna make a food joke.) The first thing that strikes you about the band is, shallow as it sounds, how they look.  The contrast between the singers was incredible: lead singer Niamh Farrell resembled an expensive doll, with her simple black and white dress and her porcelain skin. Podge McNamee, meanwhile, strolled on stage in a garish yellow suit (with the trousers shorn into hotpants minutes beforehand) and similarly yellow Cons, looking for all the world like a cross between an indie singer and the presenter of an 80’s kids’ TV variety show. 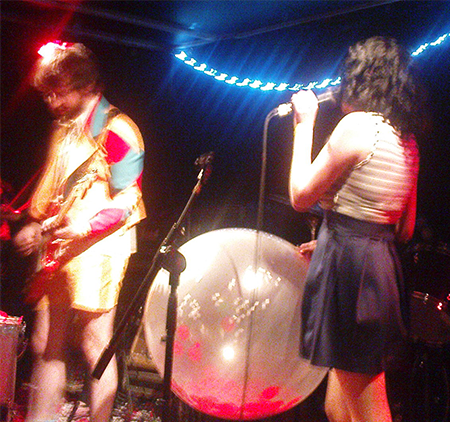 Podge promised to engage the audience tonight, and he more than lived up to his word. The band’s banter between songs was almost as entertaining as the music itself – they’re clearly at home on the stage, and Podge works a unique line of absurdist-cum-self-deprecating humour. The playfulness carried over into the songs themselves – as one of the gigantic balloons made their way back on stage, Podge seized the opportunity to take a seat, before bursting it with the end of his guitar, leaving the flimsy remains hanging off the tuning pegs for the rest of the song.

And if that kind of effortless charisma didn’t put Ham Sandwich on another level when compared to most Irish indie bands, their music certainly does. Songs like “Sleep”, “Thru The Grass” and the impossibly loud “Click Click BOOM!!!” from their debut album Carry The Meek,  their cover of Shakespeare’s Sister’s “Stay” from Sparks n Mind (an upcoming Aware charity album), and a selection of newly-written songs clearly placed the band in the upper echelon of Irish bands – they’re certainly the best young Irish group around. Niamh and Podge had the crowd eating out of their hands – taking the noise in Whelan’s down to a whisper as Niamh sang a stunning solo tune, accompanied only by the softest of drums and some echoing guitar fades; or letting the crowd take a chorus as the gig rose to a hugely satisfying pre-encore climax.

Particular highlights: their performance of “Never Talk” managing to encapsulate everything great about this band, all raw guitars mixed sweet harmonies and genuine sentiment, performed with a rare energy; Niamh giving the violinist, Sarah, a glowing introduction, which led to an impromptu moment of traditional Irish music; Podge apologising to a band member’s mother, who was standing beside a speaker, and being quickly deafened; “Click Click BOOM!!!” whirling into a noisy crescendo, culminating with John Moore throwing his bass in the air.

Picking downsides in a gig like this is like going to a spectacular birthday bash and complaining that the party hats were red instead of blue: you’re just looking to find fault, you awful person, and nobody really likes you. If I had to find fault, I guess the sound was sometimes a little muddy, and the PA had a tendency to go haywire when Niamh hit some higher notes.

But dammit, that’s being a joy-hating pedant. Last night was all about the celebratory nature of music – less a rock gig, more a gigantic party, with an amazing soundtrack. On the basis of this concert, Ham Sandwich deserve to be the biggest thing to come out of Ireland since U2, and that’s not a word of exaggeration. The gig can be summed up in much the same way as Podge: colourful, a little bit messy, and a holy hell of a lot of fun.

(Some photos come courtesy of the excellent CoyoteTrax, whose webcomics review-o-blog you can read with your eyes here: HERE. Thanks Trax. Thax.)