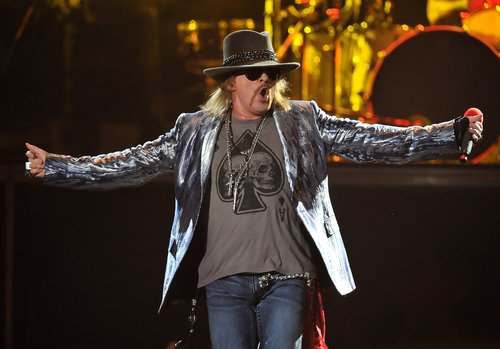 I’ve seen Guns & Roses live, about four months ago; they were pretty bad. I mean, Axl was pretty OK, even though it took him five minutes to take off his gold rings to play the piano, but the rest of the band… it’s not that they played poorly or anything, it just wasn’t G&R good. As if that wasn’t enough, when they played stuff from Chinese Democracy, that was just enough. Plainly put, the new stuff isn’t as good as the old stuff, and now they want even more new stuff? Why, just why ?

Guitarist DJ Ashba explained that Axl already has plenty of demos to start the recording:

“This is the first time we’re all going to be in the same place for a month solid. That will be our main focus,” he said. “I think we’re going to get a lot done. It’s just a matter of sitting down and working together as a band, putting together what we feel is gonna be the best Guns record. “Axl’s put together such a talented group of musicians, and there are so many songs that are already worked out. We’ve got a good jump on it, for sure – and I can’t wait.”

In case you’re not aware, the band is currently doing a Las Vegas gig. Yeah, really, Guns & Roses are playing in Las Vegas! They’ve got a 12 day arrangement, and they wanna make it unique, and get the ball rolling for the new album.

“We’re playing three shows a week and our main goal is to make every show unique,” said Ashba. “We realise there are going to people flying from all over the world to maybe one, two, three shows. We so take into consideration there are local people that may show up to every single show. It’s so spontaneous live – we’ve never followed a set list.”