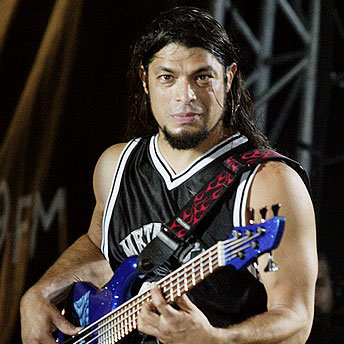 Who here has heard ‘Lulu’? Ok, now out of you, who thought it was crap? Lots of people, apparently.

Lulu was probably the most controversial album Metallica wrote (to put it lightly) – working with Lou Reed and doing this kind of music just… it didn’t sound bad but… it didn’t sound that good either. Speaking to the Detroit Free Press, bassist Rob Trujillo has conceded (via Metal Hammer) that it wasn’t exactly what fans were after:

“Obviously there were mixed reviews on our Lou Reed experience. Some people thought it was an amazing artistic statement. A lot of Metallica fans thought it was crap. (Laughs)”

However, Trujillo believes that moving into uncharted territory is crucial for Metallica’s development as a band:

“You take chances and kind of go with the flow of it. We just try to have a good time. That’s the name of the game – be creative – and sometimes it works, sometimes it doesn’t work. That’s what makes the band special – the fact that Metallica can go in and play with an orchestra and collaborate with the likes of a Lou Reed, and actually do a bit of improvising in uncharted territory.

Well… maybe we don’t really want Metallica to develop. Most fans love the old Metallica – loud, mean, and in your face. But that’s not what they want, apparently.

“In this day and age, it’s important in staying relevant, especially for us. We’re inspired by so much, we like to try things. Sometimes financially it can be a task … We’re there to deliver the passion we feel for music. When we put on the guitars it’s like we’re kids again. And that’s different from a lot of bands when they get older, to still connect with music that way. We come up with so many riffs – our problem is trying to keep them all out of one song. (Laughs) It’s a good problem to have.

“Right now we’re having a hard time focusing on making a new record because there’s so much else going on.”