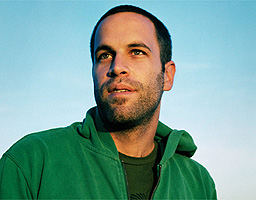 Jack Johnson has a very interesting story, after being a pro surfer who suffered from an accident, turned (during a butterfly sort of metamorphosis) into a great singer, which has the rare ability to put pure feeling into words and sounds. He is already a legendary songwriter, and the critics are fascinated by his work and unique signature sound.

I’ve admired him since his first release, and he truly is a pleasantly unexpected appearance in today’s music scene. But what surprises the most is not that he has been acclaimed by critics, but the fact that so many fans love him as well! Because his music is definetly not mainstream at all, and it’s not the kind of thing you would expect to have commercial success. With his deep and ingenious lyrics, he fascinated the ears, minds, and hearts of almost everybody.

His last fantastic album, Sleep through the static, sold 180,000 copies just in the U.S., topping the charts! Now that’s what I call a great surprise. Way to go!

Having gone from playing at his family barbecues and atop boats on far-off surf trips, it must be a touch surreal when Johnson finds himself traveling the world with his band, performing in front of delighted crowds. But he deserves it! So quit standing there, go get a ticket to one of his shows!