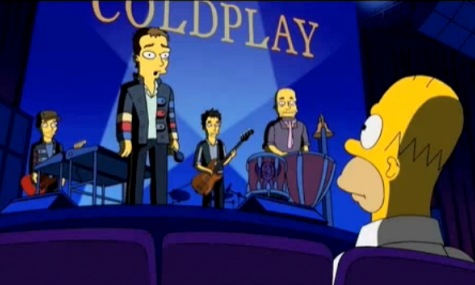 “The tambourine? I might as well play with dolls!”

It seems last night’s television broadcast wasn’t entirely a musical fail fest *cough Grammys *cough. After American Dad had My Morning Jacket as guests for a feature episode, The Simpsons brought down Coldplay to the radioactive suburbs of Springfield, albeit for a short cameo.

Check out the video bellow which features a short sequence of last night’s Simpsons episode where Coldplay get featured trying to play their Grammy-winning “Viva La Vida” for Bart and Homer, but that’s just towards the end. The rest of the video sees Chris Martin in the Simpsons studio recording his voice overs, where he actually delivers some witty improves. Oh, and you also get to see which of the tambourine punch lines gets used in the final cut episode. Fascinating stuff for Chris Martin and Simpsons fans alike.

By the way, is it me or did the animators did a sloppy job with Martin’s caricature? Doesn’t look anything like him.