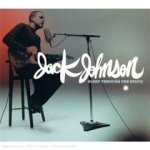 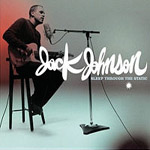 In case you know your music, you already know that Jack Johnson is a legendary singer/songwriter whose musical individuality is as fascinating as it is peaceful and calming. Jack’s band consists of long time members Adam Topol (Drums) and Merlo Podlewski (Bass), and Zach Gill (Keys) who joined the band during the tour to support In Between Dreams and the producer was JP Plunier, who was the producer of Jack’s first album Brushfire Fairytales. What’s interesting about this album is that it was recorded 100% on Solar Energy.Before we get in it, here’s the artist’s claim on his work, and not only:

Sleep through the static isn’t a departure from his style, it’s just a bit different, with some electric guitar and drums and that kind of stuff. Overall relaxed and laid back music, but if you stop a bit and listen to the message, you will be even more awed. Not your everyday lyrics here; in fact, nothing is common here. Huge amount of hooks here which just goes to show that as a songwriter, Jack might just be the best from the “new wave”. No songs here are less than great and besides the fact that they are great from the first listen, after that they never stop growing on you. I’ve been listening to it for more than a day and I bet tomorrow it’s going to be the first thing I want to listen to.

The lead single ‘If I Had Eyes’ is upbeat compared to the rest of the album and very catchy, and it’s just as good as the rest of the album. Every tune it’s just great, and they’re all as good as the other, except probably for ‘Sleep through the static’, but that is depends on your taste. Anyway, an album for everybody; for the yound and old, for the rich and poor, the happy and sad. A true work of art from a great singer and man; hats off! That’s why we love you, Jack!