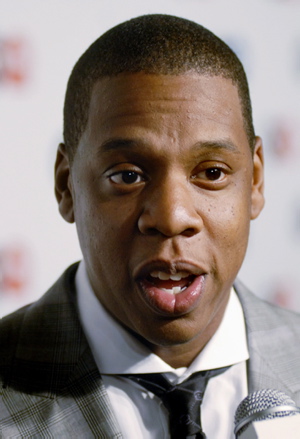 [tag]Jay-Z[/tag] is not retiring again. Or he is not retiring. In fact he went to Brooklyn to give fans an early listen to some of the music on his upcoming album, “American Gangster.” Jay-Z, along with a full band, performed several tracks from the album inspired by the upcoming Denzel Washington-Russell Crowe flick.

“American Gangster,” in theatres Nov. 2, chronicles the rise and fall of notorious Harlem drug lord Frank Lucas. The artist said that watching the movie gave him a better view of his lifestyle and drug use. “Can I get my Lindsay Lohan on?” he joked before launching into his rap, though he quickly added: “I definitely went too far … I might have to edit that.”

He said that “I was watching the movie and I was pulling emotions from the film,” the 37-year-old rapper told the crowd, which included girlfriend Beyonce, on Wednesday night. He claims that rap releases lack a story and in his mind this is the most important thing. They lack substance.

“I know there’s a whole thing on censorship; this album is an easy target. I think it’s misplaced,” he said. He also seemed to criticize those who are against the use of the N-word in rap lyrics, noting there are other hurtful slurs in the language: “What are we going to do, take every word off the table?” “I’m not knocking the way anybody makes (their music),” he said, “(but) I think a body of work is what the game needs right now.”

He has a point. Hip hop and rand are not at their better times.