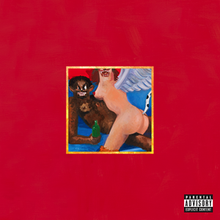 I remember when OutKast’s Speakerboxxx/The Love Below came out. It was the album that convinced me OutKast could fucking do anything. They were incapable of committing mistakes. OK, the album was too long (mainly The Love Below, of course), but “Hey Ya!” is, like, the greatest thing ever. Then something happened: OutKast stumbled. They made an album – Idlewild – that sucked. How could this be?

It’s simple: they lost focus of what mattered. That is to say, they lost sight of what made them great in the first place: the utter fearlessness of their music. Some might call it conceit – the idea that you know you can do whatever you want and make it great. Every album built upon previous efforts in a logical succession of brilliance. They never repeated themselves and there were no retreads. They were constantly looking to the future, never the past. But with Idlewild, they became a shell of their former selves because they reverted to what they’d already done. There was no forward-thinking. It was a record full of looking-back, been-there, done-that, etc. Certainly, someone had to replace them as the most exciting thing in hip-hop.

Which brings me to Kanye West. Blasphemous or not, Kanye is the new OutKast. He’s got the same audacity, the same intrepidity, the same heroism of OutKast – but with one key addition. He’s arrogant. And arrogant about being arrogant. West lets his ego rule his world. And its his greatest strength. West can do anything because purely because he believes – nay, he knows – he can. Sure, it’s made him an asshole of the highest order, but it’s also made him the left-field genius he’s become.

When Yeezy started out using soul samples as a way to channel a better time (see The Blueprint), he clearly only saw this as a starting point. Sampling Chaka Kahn and the Jackson 5 was a way to break through into the mainstream so that he could do whatever he pleased. It was never the end-game. Perhaps accidentally, he became a trend-setter overnight. He made modern classics with this template.  But, suddenly, taking classic soul and chipmunk-ing it up was the norm in hip-hop.

So Kanye moved on. By album three, 2007’s Graduation, he’d all but moved onto the next creeping trend: Europop. Instead of Curtis Mayfield, he used Daft Punk. He still used Motown, but it was subtler and more of a spice than a flavor. Right next to his past (Michael’s “P.Y.T.”) stood his future (Graduation‘s “Flashing Lights”). Each album of his career – hell, even individual songs! – has been a stepping stone to something more than the sum of this intangible something’s parts.

This explains the 180 of his follow-up, 808s & Heartbreak. Here, he embraced the Auto-tune thing that T-Pain subjected us all to. The difference was, he used it to make music apart from his previous outings. It just so happened that using the T-Pain effect was the in-thing at the time. 808s, however, had one important theme: minimalism. The album is as stripped down as Kanye could ever be – this from a guy who up to this point had always seen bigger and more as better. Much like his ego, of course. To have a beat, a keyboard and a vocal be all that you use to make a great pop song became a trend. Backpack rappers (ahem, emo rappers) like B.o.B and Drake moved shit-tons of records based upon this broken heart vibe. Party-rap certainly isn’t dead but it isn’t new, either.

So the only thing left for Mr. West was to shift again. Hence, My Beautiful Dark Twisted Fantasy. Before you even hear this record, you must acknowledge how ballsy it is for an artist in this age to release an album’s album. No one buys albums anymore. Music “fans” just pick them apart on iTunes. But Kanye doesn’t give a shit. He’s gonna make a piece of art meant to heard in a specific order and that requires patience to fully enjoy and understand. Kanye knows – knows! the egotism! – that the public will listen to him in an age where not only don’t we purchase albums anymore, we don’t listen to them, either.

Yeezy knows this. He knows this because of the ideas he can pull off that no one else can – like sampling King Crimson (“Power”) and Black Sabbath (“Hell of a Life”) on the same record. And creating a nine-minute single containing three minutes of him singing into a vocoder (“Runaway”). Who the fuck does that in mainstream music? And having a song feature eleven guests (“All of the Lights”). Yeah, he’s still using classic soul (“Devil in a New Dress,” “Lost in the World”), but he’s also using Mike Oldfield (“Dark Fantasy”) and Tony Joe White (“Hell of a Life”).

And all of this about the music. A cynic might argue he’s put all of himself into the beats because he’s got nothing left to say. After all, he tweets more than any one else. He makes an ass of himself just as often. He makes awkward apologies on TV, only to recant them days later. Oh, you cynics couldn’t be more wrong. West has never been this clever or this personal before. Sometimes he’s both within the same song. Opener “Dark Fantasy” contains the absurdly inventive line “I fantasized ’bout this back in Chicago/ Mercy, mercy me, that Murcielago,” and just a minute later wonders, “The plan was to drink until the pain over/ But what’s worse, the pain or the hangover?” Then there’s “Power” where West considers whether he should have (and use) all the abilities he’s been given to affect the world while simultaneously admitting to it: “Now I embody every characteristic of the egotistic/ He know, he’s so fucking gifted.” Then, on that same song, he philosophizes, “They say I was the abomination of Obama’s nation/ Well, that’s a pretty bad way to start the conversation.” Once again, Kanye knows that you’ll follow his zig-zag logic. The entire record’s is immersed in this dichotomy: One minute he’s calling himself a douche bag (which he is), the next he’s referring to himself as a “motherfucking monster” (which he also is).

That this dualism canvases Fantasy is the reason he allows the guests to upstage him on the mic. West understands that it’s about the final product, not the pieces involved. Thus, on “Monster,” the year’s best posse cut, both Jay-Z and Nicki Minaj show West  up on his song. But the star is OK with this because he recognizes that having the best album means having the best guests which means having the best guests verses – even if they are better than his. It’s also why Kanye allows Kid CuDi to out emo-him on “Gorgeous,” as well as allowing Rick Ross to out-brag him on “Devil in a New Dress.”

I could go on and on for another thousand words making hyperbolic statements like “Pop music needs Kayne more than Kanye needs pop music” or “Kayne is the most essential element to the modern zeitgeist.” But ideas like those – true as they might be – miss the real point: Kayne isn’t defined by hyperbole, Kayne is hyperbole. It’s what he does, it’s what he is. But, most importantly, it’s the reason he the most consistently gifted musician of the last decade. Fuck reaching for the sky, or even the stars. On My Beautiful Dark Twisted Fantasy, Kanye West is reaching for God. The scary part isn’t that he’s damn close, but rather that he’s aware of it.