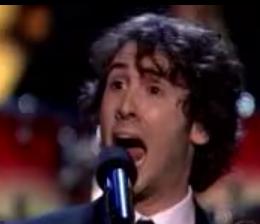 Josh, dude, that was freaky!

Just like the VMAs or Oscars, I just don’t give a shit about the Emmys. However, this weekend (September 21), when this year’s 60th Emmys were held, something pathetically fun occurred, which, I’m sad to say, I regret not saying it live. I mean, I’m still watching this stuff as I type and I’m almost rolling over the floor! Yes, I’m talking about the now notorious Josh Groban ‘performance’ of over 30 TV series theme songs, spanned across 30 years of show biz. Yup folks, Josh went through such classic theme songs like the ones for the The Simpsons, Friends, Happy Days, The Golden Girls, Mister Rogers’ Neighborhood, The Andy Griffith Show, Love Boat, Law & Order, The Addams Family, The Muppet Show, The X Files, South Park, The Jeffersons, Baywatch, The Brady Bunch, COPS, The Fresh Prince of Bel Air, Saturday Night Live, Late Show with David Letterman, Late Night with Conan O’Brien, Ed McMahon, Rawhide, Two and a Half Men, Gilligan’s Island, MASH, The Carol Burnett Show.

Sure, not all of them are Ave Marias, but who are we to judge? Still, part of me is just boiling inside seeing such immense talent wasting himself over crap like this, but, hey, guess what? The other part of me is still rolling over the fuckin floor!

P.S. For more Josh Groban goodness, you definitely have to check this out!