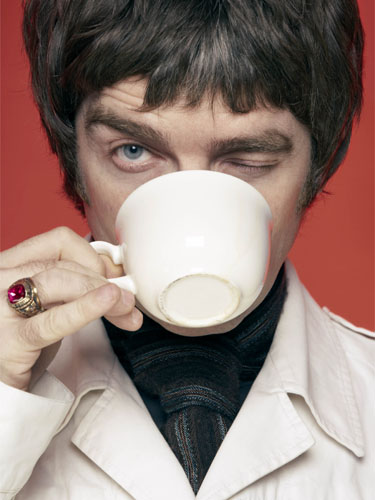 I don’t know if Noel Gallagher‘s recent bump to the head affected his judgment or anything, but just recently he announced he’d like to release a solo album soon. His first one, as far as my humble knowledge is concerned (and Google’s of course). Furthermore, the Oasis singer/songwriter said he’d like all four members of the band to releasing their own stuff, as soon as their latest effort, “Dig Out Your Soul,” gets out and, probably, after their supporting tour is over.

“I’d like for us to do separate projects after this record,” he said. “We’d all have to agree on it, so it will probably never happen. I’ve got loads of new songs. Somewhat predictably, they’re all brilliant.”

The whole thing was predictable since 2006, when Gallagher toured the UK, Europe, Japan, America and Australia in a series of acclaimed intimate semi-acoustic gigs accompanied by Gem Archer and Terry Kirkbride on percussion. The whole things proved to be quite successful and further gigs were organized in 2007. Actually, March 2007 saw Gallagher perform in Moscow — the very first time an Oasis member has performed in Russia.

Oh, and talking to Blender about his recent mano-a-mano, ‘tard lyric-to-lyric dissing with Jay-Z, with direct relation to Noel’s previous suggestion that a rapper would be unsuited to headline Glastonbury Festival, he said:

“What did I think of Jay-Z doing ‘Wonderwall’?” he asked referring to the cover of the song the rapper played to open his Glastonbury Festival set this summer. “It was pretty funny. But I’m not sure one should be seen in public with a white Stratocaster.”