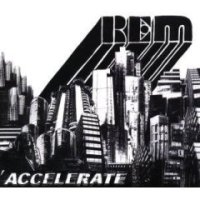 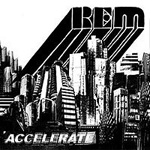 I used to love R.E.M.! Despite the fact that I never bought that ‘best band in the whole world’ crap, they were good; they were more than good, they were fantastic! They just brought this positive energy that was just captivating. Then they turned really political and stuff and so the past three albums dispelled some of their charm. But now, with this return to the roots they managed to clear of the rust from their guitar chords and manage to release something that’s actually good. But it’s kinda short, at just under 35 minutes. It’s very energetic and politically charged, with pretty much obvious lyrics such as ‘if the storm doesn’t kill me the government will’, and it’s like a cold shower on a not so sunny day.

This is not their huge comeback, but it’s a huge step towards it! The new direction of R.E.M. is the old direction – and that’s just great! From the very first chords of the opener, Living Well Is The Best Revenge, you know; you know this is not your average record, you know this is a record you may want to listen to many many years from now. By the way, the things they do on those D chords… It’s just fantastic! Listening to this song makes you scream out loud: R.E.M. IS BACK!!! After that, you get a taste of the ever sharp lyrics and overall brilliant backing vocals from Mike Mills with Man-Sized Wreath – it’s catchy, dynamic, and keeps the mood going. Then you have the single Supernatural Superserious. This song has just every little thing a single should have: it’s not the best track, but it’s definitely the most commercial track, with a huge hook delivered by Stipe just like he did in the good old days. Hollow Man is perhaps the track that gives me faith their follow up will be an incredible work of art. It’s an impressive display of song writing: it makes you think it’s going to be a mellow chill out tune but then turns into a power-pop anthem with pretty much senseless words; what more can you want?

Houston is an interesting sample : it has weird sounds created by Mike Mills (on the keyboard part). The track is perhaps representative for the whole release: if it would have been longer, it would have been just a bit redundant and not that pleasant to listen to; as it is, it’s not really fantastic, but it has this sense if airy mystery, blunt force and soothing rain. Accelerate (the song) is a true reminder of the glory days – basically post-punk riffs and kind of progressive guitar parts. Of course after this we all need a ballad – Until The Day Is Done. Nothing impressive here, but nothing bad either. However, the follow up ballad, Mr. Richards is a bit more interesting. It’s the kind of song that would have been massive in the 1990s, with a Simon and Garfunkel feel. Sing For The Submarine starts in a ballad way, but ends as a blistering solo with wicked drumming. This mood is continued with Horse To Water, which features a lot of screaming and stuff. This album ends with I’m Gonna DJ, which seems to draw a line an make the math. It makes fun of the apocalyptic paranoia, contrasting with the other tracks. R.E.M. claimed they deleted any songs that didn’t sound great, and let in just the good guys. Every track here is definitely worth it, but a few more would have been just great. But their next work… it’s going to be just huge!