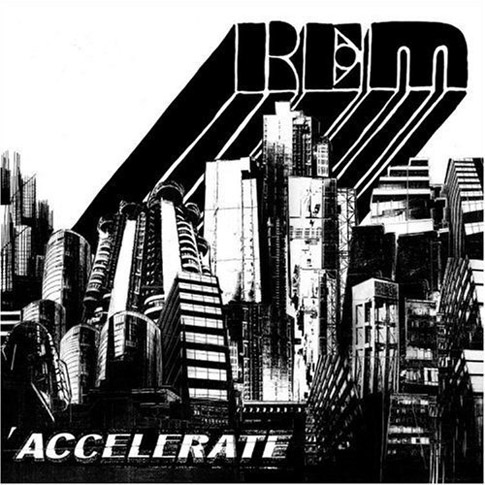 A lot of hype’s been revolving around the Athenian trio of late and with good reasons too, after all a new [tag]R.E.M.[/tag] album is always a good motive to celebrate, especially when their previous record was a total slump. Seems like I find reasons to post about R.E.M. week after week (just barely got over my Radiohead thing), this time it’s about their upcoming tour, alongside the fine lads from The National and Modest Mouse. The tour will be more of a mixture of European and North American dates, that will span across four months, well six if you count the loose dates from March and May.

R.E.M.‘s cover art for Accelerate out March 31 – UK/April 1 – US
Accelerate ships in stores on March 31 in the UK and April 1 in the U.S. from Warner Brothers, and as expected by most, it will accompanied by a special edition version, perfect for the R.E.M. die hard fans and collector affectionate. The respective special edition is a CD/DVD combo featuring “special Amray package with a 64-page booklet inside” and, on the DVD, ” a Vincent Moon 48 min. film of behind-the-scenes footage, and performance pieces of various songs on the album,” alongside two new songs: “Red Head Walking” and “Airliner”.

And as bonuses have seem to get so popular lately, here’s a video of frontman Michael Stipe in NYC, enjoying a coffee in the street and chatting on the camera. The video covers mostly the band’s latest single, Supernatural Superserious, which Michael descripes as a “geek anthem” about “terrifying, humiliating things that happened to us in our teenage years that follow us through life,” but also a small take on Michael’s opinion regarding the current US administration.

Dates and venues (via P4K):