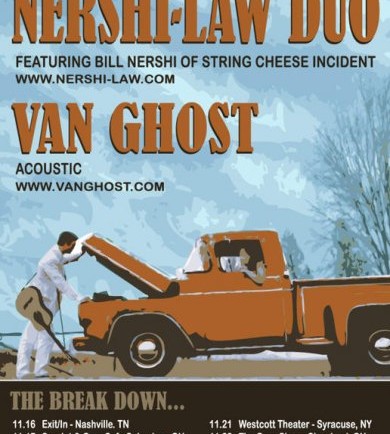 Bill Nershi, String Cheese Incident front man and his acoustic duo Nershi-Law are making the final stop of their U.S. tour with rockers Van Ghost tomorrow November 25th at Chicago’s own Subterranean. And, this is not a show to miss!

Van Ghost is an Americana rock band that was started by Michael Harrison Berg, a previous music business slave before giving his musical talent a go ahead again. Van Ghost released their first album Melodies for Lovers this past year and it has quickly picked up fans left and right.

This was Nershi-Law’s first Midwest tour and they are finishing tomorrow night, November 25th at Chicago’s Subterranean. This is a black Wednesday night… no miss show! Definitely check this out if you are in the windy city!