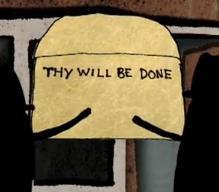 A story of departed buddies and nonreciprocal farewells  make up the music video for Headlights’ reminiscent “Love Song for Buddy“, which premiered today on The Music Slut. The video was  Illustrated by Scott Marvel and edited by Matthew Hane. Love Song for Buddy is off the band’s recently released album Wildfire (ZME rating 9/10) out now on Poly Vinyl Records. On a similar note, check out our interview with Brett from the band that we did a while back, if you haven’t already.