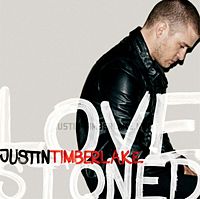 A few days ago the video premier of Justin’s new video LoveStoned (also know as /I Think She Knows Interlude) took place down at Yahoo! Music. LoveStoned is Justin’s fifth single in North America and the forth in Europe drawn off his second album FutureSex/LoveSounds.

The song is about Timberlake’s almost obsessive desire for a girl, almost like a drug addict. The term “lovestoned” sums Justin’s feelings for the mystery girl, who is simply driving him insane. Justin took the time to say a few words about the making of his unique new video, filmed completely on the “green screen”, consisted of high tech 3D animations with sound waves that bend to LoveStoned beat and JT’s dance steps. Justin described it as a total awesome experience trying to resume it all into one fraze: “TRON 2020 meets some R & B dance music “.