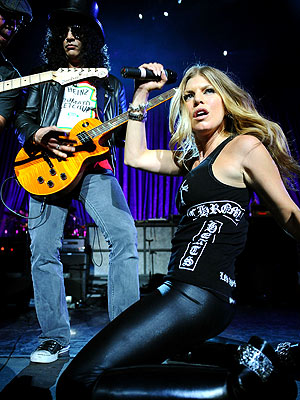 So here we are boys and girls, and once again it’s WTF Time. This weekend, while Fergie was singing in Coast Mesa, California, Slash joined her on the stage to sing some tunes, including Sweet Child O’ mine and Heart’s “Barracuda.”. As you can probably guess from that moment Slash totally had the fans, leaving a Fergie that performed pretty well in second place.

But despite her good performance, she was absolutely nowhere near Axl in musical terms and also she doesn’t have half of his charisma. But the real issue here is wtf was Slash thinking ?? I know Velvet Revolver have some problems, but come on, Fergie ?? He played great, way better then the (so called) Guns’n’Roses play the guitar part.

This is exactly the kind of thing that makes you feel kind of sorry for the GNR legacy; what happened to that band that made entire cities countries go mad when they had a concert there?? Where are those amazing band members that made amazing songs and used to sing them in the biggest stadiums in the world ?? As far as I’m concerned, this was in no way something I would have expected from Slash.

Perhaps he needed the money; perhaps it was a publicity stunt. Still, how many GNR fans would go to a Fergie concert?? I’m not saying she’s a bad singer, on the contrary; few would have been able to sing these tunes as good as her. But they are not her tunes, she doesn’t have anything in common with Slash, and when a girl starts singing “She’s got a smile”, you know for sure something’s wrong there. Still, I’m pretty sure some will disagree with me, so for them, it’s just my opinion. Here’s the video that will probably cheer you up.